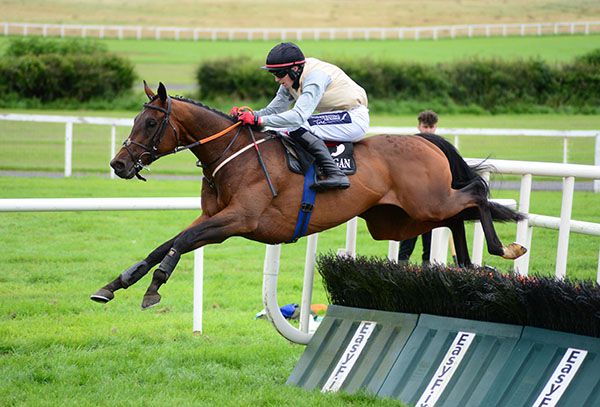 Whirling Dervish finally started to pay back on some of the six figure sum he was purchased for last autumn when recording a facile win at odds of 20/1 in the Athlone Maiden Hurdle at Kilbeggan.

The Camelot gelding won twice on the Flat for Jessica Harrington to reach a rating of 100 but, having been bought for 120,000 at the Newmarket Horses In Training Sale last October, was generally disappointing since sent hurdling by current connections.

The Gavin Cromwell-trained five-year-old was reappearing here after a break of over four months and made good headway to head the front-running favourite Santana Plessis before the last.

The 20/1 chance cruised home under Keith Donoghue to beat the ‘jolly’ by an easy six and a half lengths, with Jack Hackett a further two and three quarter lengths back in third.

Cromwell said, “He was a good Flat horse but we’ve had a lot of trouble with back problems and his jumping hasn’t been great.

“He jumped better today and it’s nice to win a race with him but clearly he was bought hoping he’d be a lot better than he is.

“He’ll go handicapping over the summer and we’ll see where it brings us.”