Win number eight for All The Chimneys 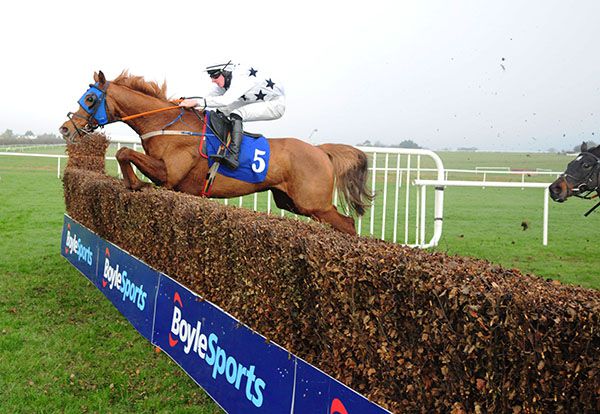 Four 12-year-olds contested the ThurlesRaces.ie Handicap Chase but it was the consistent All The Chimneys (9/2), just a year younger at 11, who came out on top.

Hitting the front on the long run down to the last (just one fence jumped in the straight with the second-last repositioned to a location before the turn-in), the Willie Austin-trained winner was driven out to beat Presenting Point (18/1) by five and a half lengths.

Espion De Chenet (11/1) was another three lengths back in third, a place ahead of the 4/1 favourite Fox Le Bel.

It was a fourth win over fences, to add to four over hurdles, for the durable Bach gelding.

Winning rider Trevor Ryan said: “We thought he'd win his second last race here but everything went wrong and he was only beaten two lengths after rattling home.

"That's eight races he has won and I finally won on him! I've been beaten on him more times now but it is great to win on him.

“He made a couple of little errors early on. It’s just his way.

"When he’s right he’s deadly and when he’s wrong you just need to give him his head and sit back, he’ll gallop through it. He always stays straight and he finds his own legs at the back of it.

"I’ve tried helping him before and he just gets awkward, so it’s just as easy to let him do his own thing. He’s good enough at it at this stage.

“The (re-applied) blinkers really sharpened him up today because he is a horse that can idle when he gets there.”

"Willie (Austin) is at home doing the work, he is some man to graft."