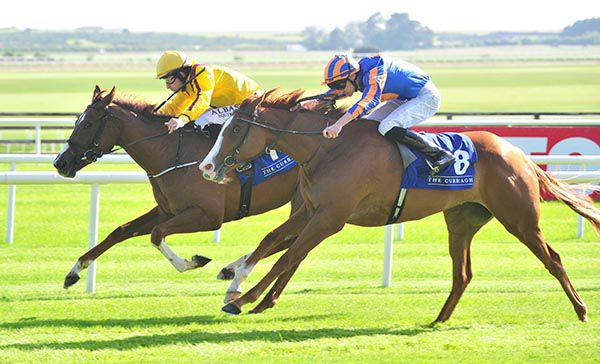 The Jessica Harrington-trained Windracer battled gamely to make a winning debut in the opening fillies maiden at the Curragh.

Shane Foley bounced out in front on the 11/4 shot in the seven-furlong contest and she was strongly pressed passing the two pole by hot favourite Love (11/10).

The pair had a good battle inside the final furlong with Foley only really getting serious with his mount in the closing stages to hold the market leader by neck. The pair were five-and-a-half lengths clear.

Windracer was well touted before the race having won a barrier trial at Naas earlier in the month.

The daughter of Showcasing had cost €240,000 at the Goffs Orby Sale last October. She is half-sister to Listed winner Windfast and her dam is a half-sister to White Muzzle.

Harrington said:- “She was great and the barrier trial definitely helped her. Shane said she winged the gates, she’s a very big filly and he just let her use her stride.

“They were racing from a long way out but she stayed well and was going away at the end.

“I entered her for the Moyglare yesterday, and she might go for the Debutante (before that). It’s the first horse that I’ve had for (American owners) Stonestreet.”

Paddy Power introduced the winner at 33/1 for next year’s 1000 Guineas.