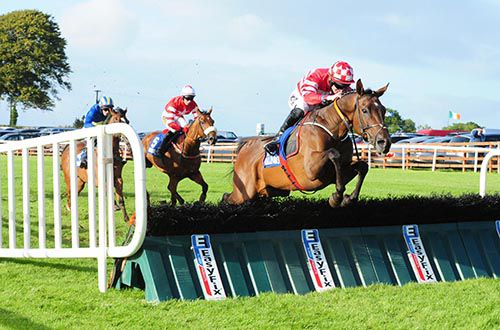 Walkabout continued the impressive recent form of the Gordon Elliott stable by taking the feature race at Ballinrobe, the E.P.S Handicap Hurdle.

The 6-4 favourite was always travelling powerfully in the hands of Jack Kennedy and cruised to the front as they swung for home.

The four-year-old looked set to win by a wide margin when negotiating the final flight safely but Duke Cass came out of the pack to make him work for his victory and he only had a length and half to spare at the line.

Pursecco came through with a beautifully-timed challenge to land the opening Maloney & Matthews Mares Maiden Hurdle.

Wilms Warrior and hot-favourite Bobarlee looked set to fight out the finish when jumping the last together but Pursecco (5-1) was just warming to her task and stayed on strongly in the closing stages to land the spoils by two lengths.

There was an even more impressive winner of the Burleigh Accountancy Maiden Hurdle as Round Tower (11-8 fav) made short work of his eight rivals.

Connections had very little to worry about as the eight and a half length victor always had matters under control at the head of affairs before extending his advantage when asked to go and seal matters.

There was heartbreak for supporters of Shamat as he tied up badly in the closing stages of the Supermac's Ballinrobe Handicap Hurdle.

He seemed to have put the race to bed a long way from home but had no answer when Barney King and Persian Wind (11-4 fav) came at him late on and it was the latter who finished strongest to score by a length.

With market-leader Licklighter crashing out, Buachaill Maith (11-1) took full advantage to open his account with an eleven length success in the J.J. Burke Peugeot Maiden Hurdle while the Brodericks's Electrical Handicap Hurdle went the way of Call Me Pj (9-1).