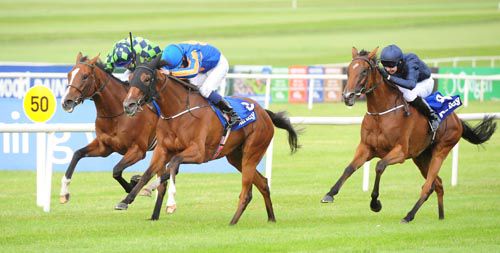 Volume, who caused a delay to the start due to being replated, was a clear leader almost from the off, but the 10-1 winner travelled well in midfield for Colm O'Donoghue before striking for home over a furlong out.

Stablemate Tapestry was flying at the finish under Joseph O'Brien, but Bracelet had just enough in hand to win by a neck.

Dick Whittington made the score between him and Toscanini 2-1 after running on well to land the Jebel Ali Racecourse And Stables Anglesey Stakes.

O'Brien's charge had come out on top at Naas, but was one place behind his rival when they met at Royal Ascot.

Sent off the 2-1 joint favourites, they both hit the front at the same time, but Dick Whittington pulled out more for Joseph O'Brien to win by half a length.

O'Brien kicked off his treble in the Darley EBF Maiden, but it was not with his expected runner, as hot favourite St Patrick's Day flopped behind newcomer East India (11-2).

The alarm bells were ringing a long way out for the 4-6 favourite, but Seamie Heffernan pushed East India into the lead a furlong out and he just held on by a neck from the fast-finishing Portage.

Sabrina Harty's 8-1 chance set the pace, but O'Brien's favourite Darwin looked to be travelling much the best approaching the final furlong.

However, Darwin found little when asked and Ansgar kept going for Pat Smullen, coming home a length to the good.

Harty made it a double on the card when Breathe Easy (7-2) made every yard under Rory Cleary in the Kilsaran 50th Anniversary Handicap.