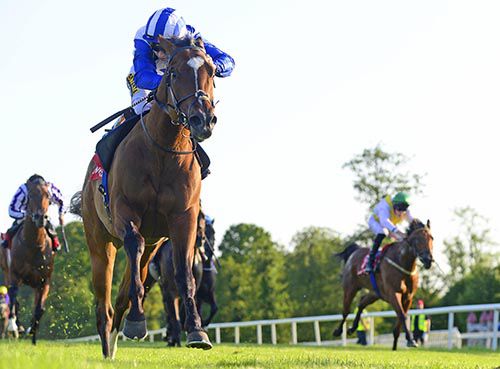 Angel Of Joy proved a class apart in the Go Racing In The South East Maiden at Gowran Park, sparking a double for Ger Lyons and Colin Keane.

Sent straight to the front by Colin Keane, the 11-10 favourite never saw another rival, easily holding the challenge of Muileata by two and three-quarter lengths.

The double was completed when Keane stuck to the rail on board 2-1 favourite Artistic Integrity in the BBQ Evening Wednesday August 13th Handicap, beating Right First by three lengths.

Highland Reel could hardly have been more impressive when landing the Irish Stallion Farms EBF Maiden.

The victory gave Aidan O'Brien his seventh straight success in the race and was never in doubt after he hit the front before the home turn.

Despite looking a little green in the closing stages, the 8-15 favourite careered away under Joseph O'Brien to score by 12 lengths from Taqaseem.

The O'Briens were denied a double when Eighteen Summers proved too strong for the Ballydoyle inmate Red Rocks Point in the Sweet Sundays Racing And Dining From 22 Euro Handicap.

Joseph O'Brien was always prominent on Red Rocks Point, but when Wayne Lordan got a clear lead at the home turn, a thrilling battle looked on the cards, and so it proved.

Red Rocks Point tried everything to settle the issue in his favour, but the Eddie Lynam-trained 4-1 chance kept finding more, eventually scoring by a neck.

Sent well over 10 lengths clear by the halfway point, the 12-1 chance kept on well up the hill to score by 10 lengths from Gold Falcon.

Wildcat Kitten (5-4) bolted up in the Gowran Park Golf Club Handicap for Dermot Weld and Pat Smullen, and could head to Fairyhouse on Wednesday.

Even So battles gamely to land Oaks Trial

Even So battled gamely to get the better of Laburnum in the Listed Irish Stallion Farms EBF Naas Oaks Trial.

Serpentine makes all under McNamara in Derby shock

Serpentine created a huge shock as he made all for a 25-1 success in the Investec Derby.

Whatsinthecorner kept up the recent good run of 'Shark' Hanlon when claiming the Angloprinters.ie Handicap Hurdle at Bellewstown.