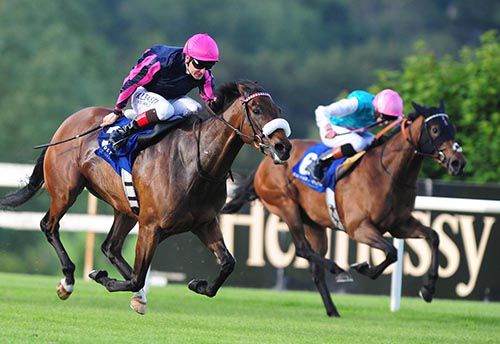 Majestic Queen sprang an 8-1 surprise in the Ballyogan Stakes, the feature event at Leopardstown.

All eyes were on 8-13 favourite Joyeuse in the fillies' Group Three but Lady Cecil's charge was last turning for home and that allowed the winner to steal a march.

An nice turn of foot saw Tracey Collins' filly kick clear and the favourite could only get within two and a half lengths of Pat Smullen's mount as she flew home for second.

Pearl Of Africa (7-2) recorded her first victory on turf with an impressive victory in the Glencairn Stakes.

Eddie Lynam's four-year-old filly was given a good pace to aim at by He's No Saint and Along Came Casey and was always going well in behind.

Brought wide by Colin Keane, the winner unleashed a power-packed finish to cruise into the lead and record her second Listed success by two lengths from the staying-on Leitir Mor.

David Wachman's Galileo filly powered past I Am Beautiful and runner-up Simply A Star a furlong out before stretching four and a half lengths clear without much persuasion from jockey Billy Lee.

Aidan O'Brien's $800,000 son of War Front led the field into the home straight but he failed to pick up when things got serious, whereas the response was immediate when Pat Smullen asked the winner to go through gap a furlong from home.

Dermot Weld's colt burst into the lead before seeing off the late challenge of Highland Reel by three-quarters of a length.

Sean Corby timed his challenge on The Ring Is King (11-2) to perfection in the Raglans Apprentice Handicap, picking up long-time leader Rathealy inside the final furlong and holding the late bid of Focussed by half a length.

Tullybeg another for Codd as Elliott doubles-up

Jamie Codd made it three winners from his last three rides, as he guided Tullybeg to victory in the bumper at Bellewstown, the McLoughlin Oil INH Flat Race.

Outsiders dominated in the feature at Bellewstown this afternoon, the Fast Shipping Bellewstown Handicap Hurdle, with 22/1 chance Ardamir just holding off the late surge of Zoffalee (50/1).

Art Power made it four wins in-a-row as he impressively dismissed his seven rivals in the Group 3 Coolmore Sioux Nation Lacken Stakes.