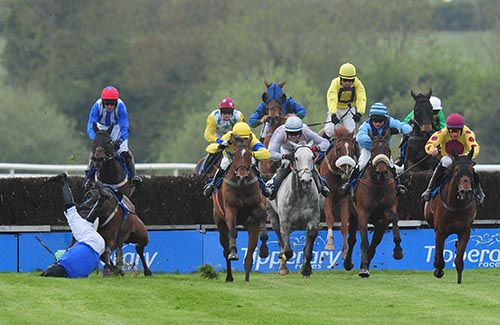 Horendus Hulabaloo looks to have a bright future over fences after scoring at the first time of asking over the larger obstacles in the Kedrah House Stud 'Well Chosen' Beginners Chase at Tipperary.

Mouse Morris' 11-10 favourite had winning experience between the flags and jumped well for Bryan Cooper, coming clear at the second last and holding the charge of Seamus Mor by three lengths.

That win kickstarted a double for Cooper, who struck again on Final Gift in the Kilfeacle Stud Handicap Chase.

John Costello's prolific point winner was sent off a 5-1 chance and after tracking favourite Winter Magic into the straight, he ran on much the strongest to score by a length and a quarter.

Patsio proved a cut above his rivals with victory in the Boomerang Animal Bedding Maiden Hurdle.

Brian O'Connell was happy to sit off the pace on the 9-4 chance, but once he asked Shay Barry's charge to run on approaching the last, he bounded clear to record a three and a quarter-length win over All About Alfie.

Stoughan Cross led for much of the contest but still had enough to battle back when headed by Selective Hearing before the last.

He had no answer to Jim Dreaper's Don Franco, though, and the 10-1 chance swept past on the run-in to secure a three-quarters-of-a-length victory under Kevin Sexton.

Island Master snatched defeat from the jaws of victory in the Glenview And Rathbarry Stud Novice Hunters Chase.

Well clear approaching the last under Derek O'Connor, he was a touch slow over the final obstacle, allowing Larry Murphy to drive Diarmuid Ryan's Mountain Philip (11-1) into the lead late and score.

Danali (10-1) was an impressive winner of the p2p.ie Mares Point-To-Point Flat Race for John Walsh, while the colts and geldings version went the way of Denis Hogan's Jack The Wire (9-4).