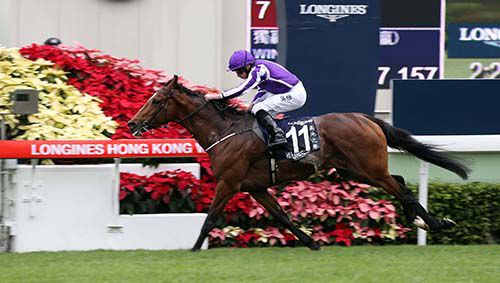 Winner of the Secretariat Stakes at Arlington Park this summer before finishing fifth in the Irish Champion Stakes, Highland Reel was last seen placing third in Australia's Cox Plate at Moonee Valley.

After a smart start, the three-year-old was allowed to bowl along at the head of affairs by Ryan Moore, before being passed in the back straight by outsider Harbour Master and Corine Barande-Barbe's stable star Cirrus Des Aigles.

Andre Fabre's Flintshire quickened up well to grab the lead in the straight, but Highland Reel came back tenaciously in the final furlong and was well on top at the line.

Moore said: "If I'd been left alone he'd have won very easy. He's turned into a very good horse.

"He's had a hard schedule but he keeps getting better. He's improved immensely since the start of the year.

"He saw the trip out extremely well. When Flintshire came by him I thought I was in trouble, but this lad really dug in.

"He's plenty of class and the way he's improved through the year is quite something."

Moore was keen to pay tribute to the winning trainer.

He said: "I think he's the first three-year-old to win this and full marks to Aidan. With him it doesn't matter if the race was on the Moon, if it's right for the horse he will make sure he gets them there.

"When they went slow I had to change my game plan. He got away well and I was happy to let him roll along at our own pace.

"He's a hardened three-year-old who knows what's required and has had plenty of experience. When he gets into a battle he really wants it."

Connections of Flintshire were proud of the runner-up's performance.

Teddy Grimthorpe, racing manager for owner Khalid Abdullah, said: "He's run very consistently but had had a gap since finishing second in the Arc.

"He's run another very solid race again but has run into a very decent and improving three-year-old.

"It's good for the form of New Bay (third in Arc) and now there's the possibility of Dubai, although that decision rests with the Prince."

De Royer-Dupre said of Dariyan: "I was very happy with the run because he's a young horse and I hope there will be improvement to come.

"However, I don't know why Pat Smullen (on Cannock Chase) pushed us in all the way and I thought that was not correct. I don't know what he had to gain and it meant we had to make our run inside in the straight.

"We will take him home and think about taking him to Dubai."