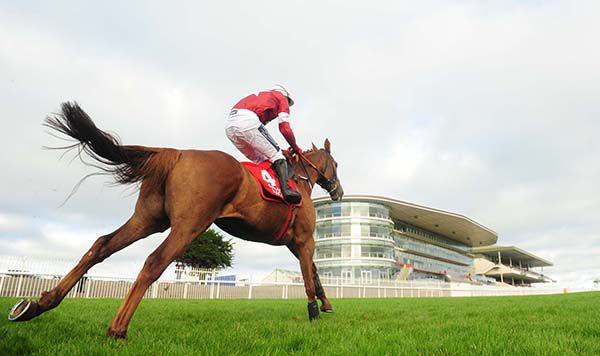 There was a tragic end to the maiden hurdle in Galway as the winner, Lucky Pass, sustained a fatal shoulder injury after passing the winning post.

The six-year-old gelding was making his first start for Gordon Elliott having been off track for 670 days.

He made little of his long absence with a smooth success today.

Keith Donoghue sent him clear before the last and the pair scooted home by three and three quarter lengths to justify 4/7 favouritism.

He was unbeaten in four outings having won a Loughanmore point-to-point for Brian Hamilton in April 2015 and a pair of bumpers in November and December for Willie Mullins that year.

He had Gordon Elliott an across-the-card double as Hardline also scored in Wexford.

Coronation Cup an option for Arc runner-up In Swoop

In Swoop has a couple of options for his next race after making a winning return to Group-level competition when taking the Prix d’Hedouville at ParisLongchamp on Thursday.

The going description at Leopardstown has been changed from good, good to firm in places and is now good to yielding following some heavy showers this morning.

Poetic Flare and Mother Earth are set to bid for Classic doubles in their respective French Guineas assignments at ParisLongchamp this weekend.