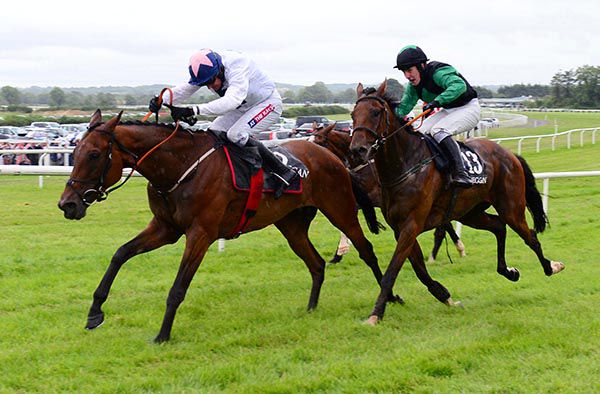 The Gordon Elliott trained Falak made the breakthrough on his sixth start over flights, as he took the opener at Kilbeggan this evening, the Like Kilbeggan Races On Facebook Maiden Hurdle.

Successful on the level in the UK when trained by Roger Varian, the son of Teofilo was then sold for 42,000 guineas at Tattersalls in July of last year.

A good second at Down Royal in January, the 122 rated victor had been disappointing since, finishing down the field in a Flat handicap at the Galway Festival.

Sent off at 10/1 this evening, he was settled towards rear by Barry Geraghty, and received reminders with just over a circuit to race.

He took closer order from three out and was ridden after the next, hitting the front at the last before going on to hold off the late challenge of Whatsafellatodo (50/1) by half a length.

Liam Gilligan was aboard the runner-up for Brian Cawley, while the 5/2 favourite Kolombus could only manage third, fading from the last.

A stewards enquiry was called into possible interference on the run-in, but the result remained unchanged.

Geraghty said afterwards: "He battled well, he wasn't doing a stroke I'd suppose.

"It's a nice winner, and it's nice to ride one for the owner (Brendan Scully) who was involved in Miss Orchestra who I won the Midlands Grand National on in 1998. It's a nice connection twenty-years later."