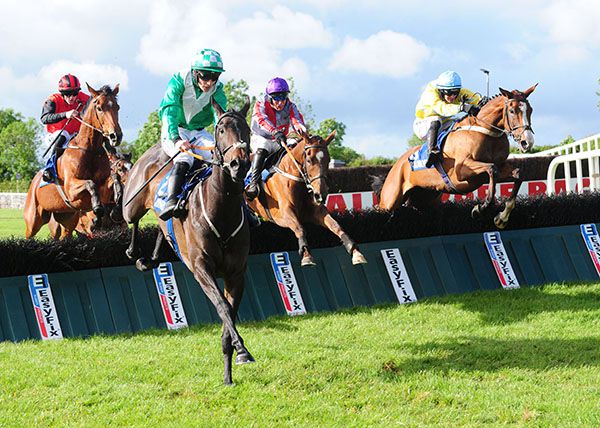 Ejayteekay leads her rivals over the last
© Photo Healy Racing

The ultra-consistent Ejayteekay completed a double for Paul Townend, as she took the feature race on the card, the Monroe's Live John Monroe Memorial Mares Handicap Hurdle.

Successful at Navan in March, the Gavin Cromwell trained six-year-old was last seen finishing a good third to Star Maker in a valuable Grade B contest at Killarney.

Sent off at 9/2 this evening, the Big Bad Bob bay raced in mid-division on the outer and was seventh with a circuit to go.

She soon took closer order in fourth and improved to lead approaching the last, keeping on well when ridden from the furlong pole, going on to score by five and a half lengths.

The Mark Fagan trained Just Klass (12/1) ran well to take second under Danny Mullins, while Bercasa (11/2) was another length and three parts back in third, with Robbie Power aboard this one for Tom Mullins.

Recent Kilbeggan winner Arctic Soffia was sent off the 7/2 favourite and she fell at the third.

"We'll see if there is something for her in Galway. She's probably gone too high to run in the mares hurdle there and we might look at the handicap hurdle on the Friday night," said Cromwell.

"There is also another handicap hurdle in Killarney so she'll go to one of those. She's after having a few runs so we'll probably give her a little break now.

"She's been brilliant. She was only cheap, I bought her in Newmarket for five grand and I think she's after winning the guts of 50 thousand.

"She's been a good old servant. She'll win on the Flat again if we go back there too and she jumps a fence so we have loads to options.

"She got a bit of black-type the last day in Killarney as well. The owners are breeders as well so they have a grand mare."

Paul Townend was earlier successful aboard Monstrosity in the opening race on the card.

* J.S. McGarvey, rider of Feeling The Love trained by Mrs John Harrington, reported to the Clerk of Scales that his mount lost her action.

* The Irish Horseracing Regulatory Board Veterinary Officer examined Feeling The Love, trained by Mrs John Harrington, at the request of the Stewards and reported the animal to have pulled her left hind shoe but was otherwise post race normal.

* The Irish Horseracing Regulatory Board Veterinary Officer examined Dixie Lee, trained by Dermot Anthony McLoughlin, at the request of the Stewards and reported the animal to be post race normal.