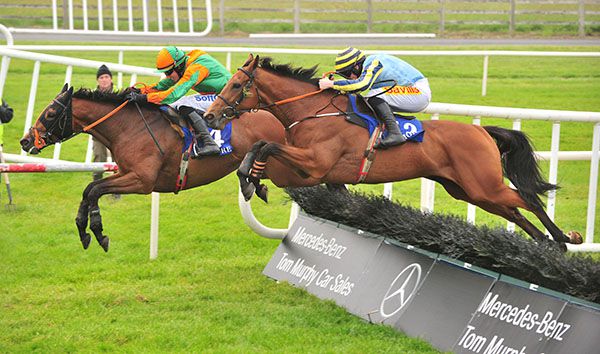 The well-backed Act Of God just prevailed in what was a thrilling finish to the Tom Murphy Mercedes Benz GLC Maiden Hurdle.

Previously trained in France, the son of Camelot was bought for E105,000 at Arqana last November, and was making his debut this evening for Edward O'Grady and owner Brian Comer.

Having opened on-course at 11/4, the bay victor came in for strong market support, and went off the clear 5/4 favourite under Bryan Cooper on what was his first start over flights.

Settled in mid-division, he made headway from the third last and got to the front before the next.

He was strongly pressed approaching the last by Razoul and after a tit-for-tat battle on the run-in, just a nose separated them at the line.

The runner-up, under Sean Flanagan for Ray Cody, was returned at 7/1, while Fightfortheroses (6/1) was another length back in third.

"I didn't think I held on, I thought I got done on the nod," Cooper revealed.

"I was in front a bit long and I thought the favourite would take me a bit longer. In fairness he stuck his head and battled well.

"It was a good performance on his first time over hurdles. We done a good bit of schooling at home but there is only so much you can do. Going forward he is a nice one to look forward to."