Power doubles up on Bective Cave 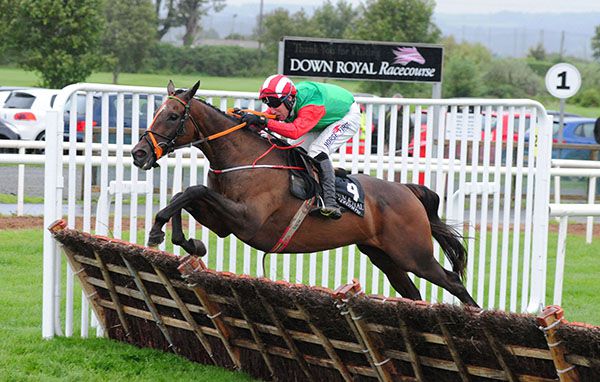 Robbie Power brought up his Down Royal double on board clear-cut winner Bective Cave.

The 9/2 chance got on terms three out in this extended two mile handicap hurdle and assumed the lead at the next.

He asserted coming to the last and strode right away to come in by nine lengths.

Important Message (14/1) completed the placings a further half a length away.

Trainer Matthew Smith said: "He'll go over fences now - I think he is around 89 over fences so we will see.

"I knew if they didn't get too much rain and the ground stayed good he would be hard to beat. He was in good old form.

And on One Cool Poet, a triple winner at this year's Galway Festival, he said: "He's entered on the Saturday and Sunday for Champions Weekend, so we will take a look and probably make a decision closer to the time.

The Irish Horseracing Regulatory Board Veterinary Officer examined Blackyellowred, trained by D.J.Barry, at the request of the Stewards and reported the animal to be post race normal. D.J. Barry, trainer, subsequently reported to the IHRB Veterinary Officer that his charge was found to have kickback in his trachea following endoscopic examination .

The Stewards interviewed J.B. Kane, rider of Important Message (GB), concerning his use of the whip in the latter stages of this race. Evidence was heard from the rider concerned. Having viewed a recording of the race and considered the evidence the Stewards were of the opinion that J.B. Kane was in breach of R10(3)(h) by using his whip with his arm above shoulder height. Having taken his previous record into consideration, the Stewards suspended J.B. Kane for two race days.