By Thomas WeekesThe Co Limerick Foxhounds have their plans very much in place for their much anticipated point to point at Athlacca on Saturday May 14 which includes two banks races.

The hunt stages two point to points throughout the year - Athlacca has been a fixture for years while nearby Rathcannon, in February, has now hosted three annual meetings. 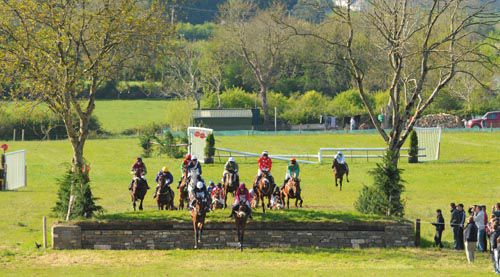 Action from Athlacca point to point
(© Healy Racing Photos)
Saturday’s meeting has been rearranged from the previous weekend and point to point secretary Ross Easom explained “we had to change our date as it clashed with Punchestown. With Easter being so late, it just wasn’t working out to have it on our original date so we moved it to May 14.”

Easom added “everything is going grand for Saturday and a group of us were putting the finishing touches to things yesterday evening. We are very fortunate to have Enda Bolger’s help for the banks’ course and the recent rain, significantly more than Punchestown received, has helped a lot. The land has a good covering of grass and is perfect ground for jumping.”

Entries for the point to point are strong with 17 horses entered for the Geldings’ Open and 16 entered for the Mares Open. Both races are to be run over the banks’ course with recent Punchestown placed Zest For Life and Butlers Storm both likely fancies in their respective divisions.

Easom adds “the banks’ races are great spectacles and to add to the occasion on Saturday, title-chasing Derek O’Connor and Jamie Codd will be riding here too.”

“Plenty of credit must go landowners Mr & Mrs James Brennan and also to Jimmy Moloney and Richard O’Regan, who both act as the clerk of the course.

“Charlie Moore, from Killeagh, is supplying the fences and the banks’ course has plenty of different features including an Aintree fence which a few of the lads spent hours making. There are also banks and hedges, posts and rails and logs to be jumped.”

The Co Limerick Foxhounds was founded back in 1734 and the kennels, at Clonshire near Adare, were donated to the hunt by Lord Darsbury. According to Easom, “Lord Harrington was a very important part of the hunt until he passed away two years ago and was a very generous benefactor. Lady Harrington still hunts with us.”

“Graham Bustin is going into his second year as huntsman, having taken over from Will Bryner who had held the position for nine successful seasons. William Buckley is Chairman and Deirdre Hogan plays a vital part as hunt secretary. Visitors are welcome and we have a very active support base – everything is in place for an excellent day on Saturday.”