There is understandably an air of excitement any time a hunt unveils a new track for their point-to-point and in the case of the Wexfords, who gave the public a first taste of Ballinaboola on November 20th last, and struck while the iron was hot on January 29th, the buzz was well-justified with two good days sport.

Former amateur jockey and now clerk of the course and whipper-in Padraig English was keen that the credit go to the landowners, the Robertson family from Templeshelin and the Kavanagh family from Moorfields. Indeed English wanted all the landowners over whose lands the Wexfords hunt, thanked and their importance highlighted.

English now runs a pre-training, breaking, sales preparation, hunters and livery operation at his Ballycuff Stables and he said: "We were very happy as we were very well supported. The last day (29th of January) was a wet day but sure we still got on okay.

"The crowd was very big the first day – there was a savage crowd.

"They'll be parking cars there for the ploughing in September (National Ploughing Championships take place at Heathpark, New Ross from September 25th to 27th in 2012).

"We are going there the whole time as far as I know, we should have that track for ourselves. There is no problem with the landowners – everyone is happy out.

"I think we have a serious racetrack and there is no problem with the availability at the moment there now. We can go right-handed there too but for the moment we'll probably stay left-handed.

"If you go down to the turn into the straight it's a fair run up to the finish. There is nowhere to hide when you turn in. I'd say horses will sell well out of Ballinaboola. 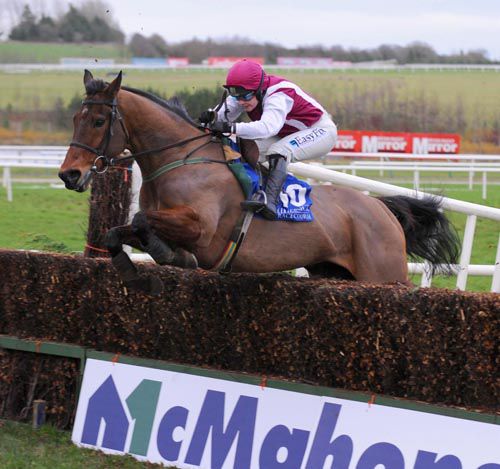 Seabass won the open at Ballinaboola in November & allocated 10st 12Ib in weights for Grand National
(© Healy Racing Photos)
"Seabass of course won with us in November and he's gone on to great things since. The horse that won the first race that day (Jarob) made 80,000 at the sales after."

Won by a distance ; same.

Won by a distance ; same.

Won by 3 lenghts ; a distance.

Won by 5 lengths ; a distance.

THE PEOPLE & THE START-UP

"Mary Kehoe (she hunts the Brees and the Wexfords and she took over in 2004) our huntswoman saw the field one day we were hunting. She showed it to me, I walked it then with Denis Hickey and Val O'Connell, the national inspector of courses for the Turf Club. That is four or five years ago – five years ago now and we got it passed but we still wanted to support the Killinicks – so we stayed there for the time-being.

"We were at a bit of a transition as we had new hunts staff – Mary Kehoe, Muriel Howard and Michael Condon. We were still trying to get back our country – our country was gone very poor – maybe there wasn't enough work being done but we are back to a serious standard now of hunting.

"We had enough on our plate with that and we had a new hunter trial course at the kennels in Moorfields and that kind of took a year or two to get up and running. The point-to-point was the last piece of our jigsaw as I'd say.

"Hunting wasn't what it should have been. When we got the country open again, it was the right time then for the point-to-point – the last piece of our jigsaw."

"Our hunting is at a serious standard at the moment. There is serious hunting going on. We had a savage days hunting altogether yesterday (February 7th) at Templeshelin. The hounds were called up at half five in the evening – a serious days hunting.

"There are a lot of people going out and there's a lot of enjoyment. There are a lot of local people getting good hunting. A lot of land is being walked and farmers being met – a lot of work is going on which means our hunt is at a great standard at the moment.

"There would be a certain amount of racing people out with us. For getting your half-bred horse or your sport horse sold it's important – you have no bother selling them on. If you can get around with the hunt you'd get around any country in Ireland or England as well.

"We go out Tuesdays and Fridays and every second Sunday or something like that. Tuesday, Friday or Tuesday, Sunday is when we'd usually hunt."

"I'd always have an add in the racecard just to support the job. We have a lot of sponsorship thank God and a lot of people are very happy. We get a lot of sponsorship from hunting people that are involved in local businesses and they are keen to advertise and support especially since we changed to our own area. There's no bother approaching people for sponsorship and advertising. There is a lot of goodwill around."

"It was gluey and tacky until the rain came and that made it easier for horses to get through. The first day with the three fences in the straight it was a fair test. There isn't many point-to-point tracks in Ireland like it. All the trainers were highly impressed with it and there was good feedback from the jockeys too.

"We might go slightly later next year than January. We hired the fences off Billy O'Brien and the aprons off Pat O'Connell. Organising tents and stakes and stuff like that then, would be another part of it and there is no problem ringing lads and getting them into the field at any stage."

"Our autumn secretary is Bridget O'Gorman and our spring secretary is Therese Costello. They are two sisters and without them things wouldn't work at all. They are very efficient – they take that end of it away from me anyway and I look after the track and that's the way things work.

"Our chairman, John Roberts is probably forty years hunting with the Wexfords. He is our chairman now for the last year or two. He is a good man."

"My racing background helped me a good bit. It's something that you're into or you're not. The Killinick lads are fairly efficient and we were with them there for years. It was easy enough to pick up things off of them about the right way of doing things.

"Breaking, pre-training, a bit of everything is what I'm at now. It's gone quieter there now but I'm getting paid thank God. I always dealt with the average sort of fella, my own customer and we never went mad. We start off horses, get them cantering before they go on to trainers."

"I was still claiming three so I rode somewhere between thirty and forty winners. I won three out of three on Danoli. He was my first winner, that was 92 and 93. The majority of my winners were for Tom Foley – I'd say three quarters or two thirds of them."