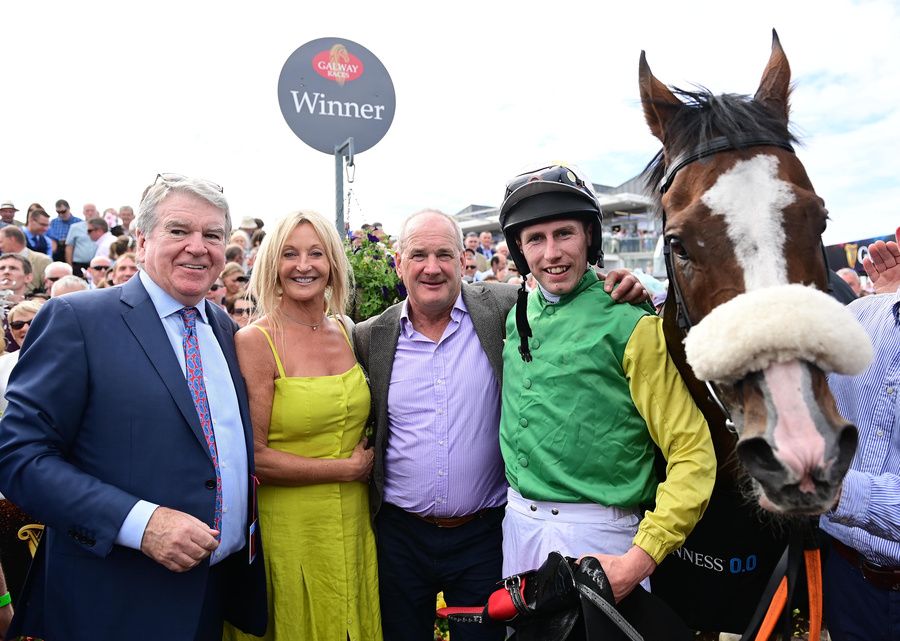 Galway is a truly special week in the Irish sporting calendar. It’s particularly refreshing as a racing fan to see all the connections of winners getting so excited and revelling in the moment. Fist pumps, flying dismounts and the sheer joy of a Galway winner is infectious. It really is the ultimate seven day party.

The spirit of Galway is epitomised by people like Shark Hanlon. The cattle dealer turned trainer comes alive for this week each year and it was fitting that he should win the iconic Galway Plate with a horse that cost peanuts.

Like most people who watched the post-race interviews with Shark Hanlon after Hewick won the Tote Galway Plate, my reaction was that this was wonderful for the sport.

An €850 purchase going on to win one of the most prestigious races in the calendar and amassing over €300,000 in prize money along the way. This really is the stuff of dreams and not the first time Shark has pulled off such a remarkable feat. A couple of years ago a horse he purchased for £600, Skyace, went to win a Grade 1 Novice Hurdle.

The victory of Hewick should certainly do wonders for a larger than life character like Shark Hanlon and I’m sure his phone will be buzzing for weeks to come with potential new owners wanting to join the party. Of course the problem is that horses like Hewick are harder to find than a needle in a haystack and Shark or anyone else could spend a lifetime trying to unearth another one.

You’d imagine this won’t stop many others trying their luck and a victory like Hewick’s must act as a catalyst for hundreds of less than suitable horses to enter training. Horses that returned unsold from sales with crooked legs, dipped backs and a host of other ailments will now start arriving in training yards up and down the country with their bright-eyed owners expecting miracles.

The industry needs a constant supply of new horses entering the training ranks to function but I’d imagine most of the bad debts left behind - and there are plenty - are from owners of these unsuitable racehorses that get disillusioned when their dream slowly turns into a nightmare. It costs just as much to train a bad one as a good one, but at least with a good one you have the prospect of getting some of your outlay back in prize money.

Another trainer that is readily associated with Galway is Tony Martin and once again he showed what a master he is at getting one ready for the big day. Winning the Galway Hurdle for a second time with the ten-year-old Tudor City was some achievement. For a relatively small yard to have won one of the most valuable and competitive races of the season for a fourth time in nine years is quite extraordinary.

Ado McGuinness is another man who targets the big pots at Galway and it was a hell of an achievement for him to bring Current Option back to win a third Ahonoora Handicap in a row on the final day. The six-year-old had shown precious little in ten runs since winning the race last year until running fourth in the BMW Mile on Tuesday. That barren spell had seen the gelding drop 13lbs in the ratings which certainly helped his cause on Sunday when he beat the English raider, On A Session, in a repeat of twelve months ago. On A Session deserves some credit too as this was the horse’s fourth time to place in this race and this year he did it on 11lbs worse terms with Current Option compared to 2020.

Restricted Licence holder Brian Duffy could be a name to follow at Galway in the years to come. In just his second year as a part-time trainer and with only four horses under his care Duffy managed to win the €120,000 BMW Mile on Tuesday with Magic Chegaga and in the process break Ado McGuinness’ stranglehold on the event.

It was interesting to hear Duffy say after the race that he had used two separate horseboxes to transport his two runners to Galway that day as the other mare Mean Fomhair is a tricky customer. That sort of attention to detail is something that you get with a horse in a small yard and Galway is a place where these little yards have an uncanny knack of popping up with big winners.

Overall the Galway crowds were down some 9% when compared to 2019, the last year there were unrestricted crowds before Covid. This mirrors the drop in attendances we have seen across all fixtures in the first six months of the year.

As pointed out in last week’s blog using 2019 as a benchmark for the industry doesn’t tell the whole story. During the Celtic Tiger boom of the early 2000’s Galway saw massive crowds attend the annual festival. The weekly attendance total hit 217,000 in 2006. We’ll probably never see crowds like those again but the aspiration shouldn’t be just to try and replicate the numbers from 2019.

The fall Wesley Joyce took on Thursday was the one really low point of the week. The 19-year-old apprentice from Moyross in Limerick was unseated from his mount Red Heel in the early stages of a seven furlong handicap. The pair were leading their 13 rivals when Red Heel tried to jump a road crossing after a couple of furlongs and unseated his rider. The promising young apprentice fell into the path of the oncoming field and suffered severe injuries.

I can’t begin to imagine how awful these last few days have been for his family. As a father of two daughters of similar ages I don’t know how I would deal with news of a serious accident for one of my girls.

My thoughts and prayers are with Wesley and his family at this time and I sincerely hope he makes a full recovery.

The Curragh had a great value bundle on offer for online customers for last Saturday’s Group One Keeneland Phoenix Stakes card. For €25 you gained admission, got a race card, a BBQ Burger and a €10 bet with the bookies.

Vincent Finegan's Latest Blog. Dropping attendances are a cause for concern

Horse Racing Ireland (HRI) issued statistics last week for the first six months of 2022. These figures were compared to the same period in pre-Covid 2019 to give context and some of the trends are quite surprising.

Vincent Finegan's Latest Blog. New whips rules in UK are a step in the right direction

I have sympathy with the stable staff and their protest at Kilbeggan on Friday evening. The walk from the stableyard to the parade ring at the Co. Westmeath venue is a solid half mile and in the current hot spell that is certainly thirsty work.

On Friday 20th March 2020 trainer Denis Hogan ran two horses in a Claimer at Dundalk. The bookmakers priced up the 92-rated Yuften as their 1/2 favourite with Hogan’s other runner Tony The Gent initially priced at 5/2.