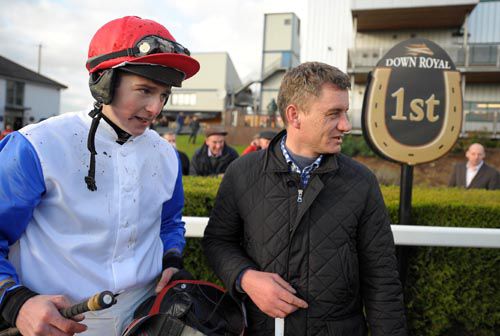 I then spent a year in England working for the Dickinsons (in Yorkshire). I came home when I was 18 or 19 and started to work for Jeremy Maxwell who is married to my mother now. I was with him for 13 or 14 years; it was mainly track horses that he had. I rode them and also rode in point-to-points as a bit of a side. I rode my claim out and had about 65 winners on the track. I was assistant to Jeremy right the way through the years I was with him.

I wanted to get back into the point-to-points but never really had a yard behind me. James Lambe was a great supporter of mine in point-to-points, he had worked in Maxwell's with me and we are long-time friends. He was the main supplier of the winners for me when I was champion point-to-point rider on the northern circuit in 2003 and 2004. I rode for Ian Ferguson for a season or two and quite a few different fellas. Denis Reddan was another supporter of mine.

I won the amateur chase at Aintree, the race after the Grand National, on All For Luck (in 1994). I rode him when he was in Jeremy's and then he went to Martin Pipe. That's how I retained the ride. I also rode him when he was fourth in the Kim Muir at Cheltenham (in 1997) for Pipe as well.

I got a training licence in 2001 and took over from my mother. I've always trained at the home farm in Downpatrick. I put a gallop in and slowly but surely increased facilities. There's far more satisfaction training a winner than riding one because there is more work that has gone into it. I have two top-class girls with me, Megan Ross and Amanda Telford, and they are a big help to me in the yard. They have a background in showjumping and eventing and ride work.

We won the Foxhunters with Warne in 2014. We sold him to the Waley-Cohens a few weeks before the race and they kept him with me. He was bought for Sam (Waley-Cohen) as it was a race he always wanted to win. Probably training the Foxhunters winner gave me the biggest buzz. On the approach to the race, everything was perfect and everything went exactly to plan during the race.

I think he won seven or eight point-to-points for us and two or three hunter chases so he was some money-spinner for Peter Magill. When he was sold to the Waley-Cohens he was always guaranteed to have a home for life. That was probably the biggest reason we sold him.

Moscow Mannon was probably the best horse I've had. He was fourth in the Cheltenham bumper (in 2012) for me. Moscow Mannon was a bit of a freak as he was an owner/bred home/bred horse. For him to do what he did was amazing. He was a very good horse. 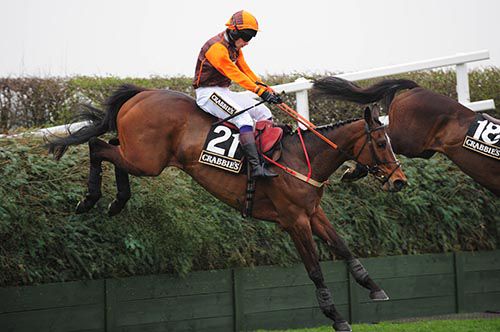 I've been very lucky that people have sent me home-bred horses that have turned out not too bad.

We have moved more into producing young horses. We are buying store horses and trying to get them to win a point-to-point and then sell them. Unfortunately, we have to sell them to keep the whole thing moving.

Definitly Red won a point-to-point for us as a four-year-old before he was sold to Britain and went on to make nearly £500,000 for his connections. It was also lovely to train young horses for Gigginstown, we ended up getting five. They were nice types of horses - Forged In Fire won his bumper on debut for Joseph O'Brien beating Ferny Hollow.

I don't have that many owners that actually keep horses in training. If they win a point-to-point or a race, they are usually sold on but David Aiken has been very loyal to me and he has held on to Archies Charm. We are hoping he is going to develop into an Ulster National horse after winning at Downpatrick last month.

There's years of despair and moments of ecstasy, that's the way I describe training! The ecstasy keeps you coming back and hooked. We just have to keep trying and keep motoring away, and that's the way it is for nearly everyone. It's a bit too late for a career change!

My parents were into racing, both sides of my parents' family would have strong racing connections. My father, Michael McGrath, was a veterinary surgeon who trained horses and was a very keen breeder. His father before him trained horses from the 1930s onwards. I grew up in a family-run operation with a small number of horses.