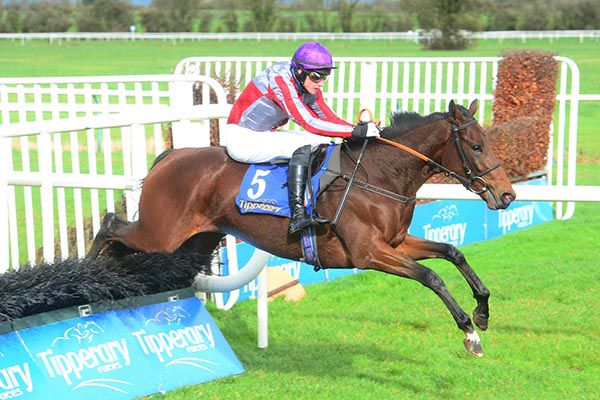 I am from Ballyloughan, just outside Bagenalstown, around 10 minutes away from Tom Mullins’ yard, where I am based.

We live beside my grand-uncle Tom (Foley), who trained Danoli and I was reared on those stories growing up. That’s where the interest in horses came from.

My grandfather Ger would have had a couple of point-to-pointers and I went with him to the races from a young age.

I did loads of showjumping before I got into the racing. My brothers have jumped on the European stage. I did a lot nationally and internationally before I went down the racing route myself. Mam and Dad would have made sure we had good ponies to compete at the top level.

When I was 13, I started riding out at home but when I decided I wanted to do it properly, I went to Tom Mullins’ at 14. I got to know Tom and Helen through getting to know their son David from the showjumping. I did a load of cross-country and eventing with David as well.

When I first got my licence Tom was very good to give me two rides on the flat. The flat was never going to work out, I was always going to be too tall but it was good of him to give me that experience so early on.

I spent eight months in Nicky Henderson’s when I was 17 and learned loads there. I was very lucky to get to sit on Might Bite, Buveur D’Air and Whisper a couple of mornings, just for the experience.

After that, I ended up working with Donnchadh Doyle, who has such a big operation bringing the three-year-olds through the point-to-point scene. I learned loads there too. You were schooling the whole time, riding good horses such as The Big Breakaway, Tactical Move and The Big Getaway.

Donnchadh, Mick Goff and James Doyle got me going in point-to-points and I rode a winner for James last November. Rob James and Barry O’Neill were a great help too.

I always wanted to go the track route though, to be a conditional. I got talking to Tom and explained what I wanted to do, and asked if he’d be willing to take me on and teach me, to make me the best I could. He was all for it.

He’s a brilliant coach. He has taught me loads. He has taught me how to look into a race, about riding a race. He’ll always go through a race with me after I’ve ridden and that’s the best way to learn. I’m very lucky to have Tom there for me. David is very good too, especially to tell me about particular tracks, because I wouldn’t have ridden them before.

Tom gave me two rides very quickly in Punchestown, including Rock Chica, who gave me my first winner on the track on Tuesday. She was actually my first ride for Tom after going back and she finished fourth. The other horse finished fifth and went on provided Charlie Mullins with his first winner in a bumper a few weeks later.

I’d say I was only back there two weeks at that stage so it was a great boost to get those rides so quickly.

I suppose Tom knew me, as I had been there before. I had to go away and mature and do a few things for myself. Going away to Henderson’s and doing the point-to-points matured me, sharpened me up and it was great to get the opportunity to go back to Tom.

Rock Chica was very impressive in the TipperaryRaces Fillies’ 3YO Maiden Hurdle. She had run well in Punchestown in what is probably going to turn out to be a hot race. She came out of it very well and we were hopeful for a good run.

The favourite seemed to disappoint a bit but the mare came on so much from her run in Punchestown. She jumped superbly the whole way, travelled everywhere. I didn’t know I was as far ahead as I was at the end but she was very good and full marks to Tom for leaving me back on her, as an amateur.

She has come out of the race well and is bouncing so hopefully she can improve again after it.

I am happy to be patient and do what Tom tells me. He’s been very good to me so far. I said that when he thought I was ready we’d give it a go as a conditional and he said to me a couple of weeks ago that I was ready. So, I’ve done the course and in the next week or two it will hopefully be all changed over and I can start off as a conditional.

I am tall, over six feet anyway. I’m 21 now but it was only in the last two years I shot up. My weight is good though. I eat healthily and do a lot of exercise and hopefully as I get more rides it will be easier again. But I have no problem off the lighter weights.

I know how competitive Irish racing is but you cannot ask for a better coach than Tom and hopefully I can repay the time he has put into me and the faith he has shown in me. I will just keep working hard and learning and hopefully more rides and winners will come my way.