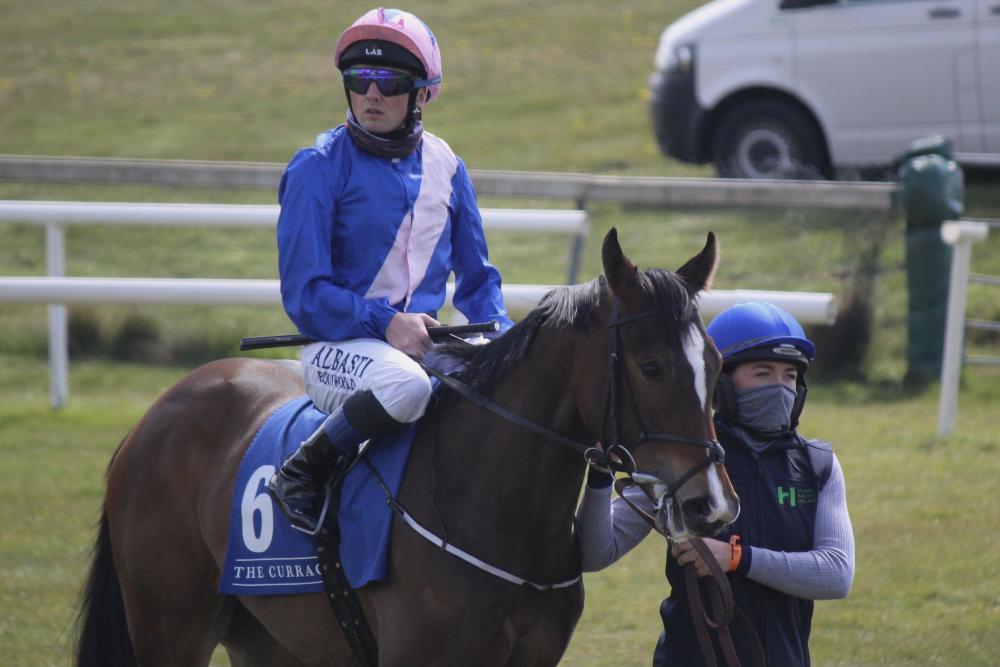 Lynne leading a horse towards the stalls at the Curragh

Then, I was riding in Killarney two weeks ago, and Rachael Blackmore was in the weigh room and she said, ‘Well done on being the first female stalls handler.’ And I’m saying, ‘Yeah, you congratulating anyone about being the first woman to do anything?’ After winning an English Grand National and she’s congratulating me!

Rachael is a lovely person. I did an interview in The Irish Field and I wasn’t sure about it but she said, ‘You know how I feel about it at this stage,’ she said, ‘but in a way, we’re doing it for other women. Don’t forget in some parts of the world women aren’t allowed drive.’ Only the other day, I heard Portmarnock Golf Club had just voted to allow women be members. So it IS still happening even in Ireland. I just don’t see it that way in this industry. That said, for Rachael to win an English Grand National is still unbelievable.

For me, it was just another way of working in racing, a sport and industry I love being involved in.

I got the taste for doing the stalls when I was in Australia. I was doing it two mornings a week on Warwick Farm, for the jump outs, which are the official starting trials for horses. And I liked it. Then I started doing barrier trials. That was the first official taste apart from the work everyone in a racing yard does putting young horses through the stalls and I had plenty of experience of that working with Jim Bolger and Jessica Harrington.

When I came home from Australia, my cousin Rory Nolan, who works for Mrs Harrington and has been a stalls handler for six years, gave me some more information on it. I was working at Dermot Weld’s for two years and Danny and Paddy McLaughlin there are stalls handlers. And I know John Wixted very well and he’s doing it around 20 years. So they all told me I should go about applying for it and it went from there.

I was delighted to get the interview to do the stalls. I think people outside of racing but also plenty that follow it too don’t understand the job the boys do down there at the start. And I don’t think they get enough credit.

People put their lives on the line sometimes to get the jockey and the horse in there. No one thinks of themselves. They’re straight in. But if you thought of the dangers of anything, you wouldn’t leave the house in the morning. Obviously, you’re careful but you can’t overthink. It’s just like getting on a horse and riding out every morning. If you thought about what might happen, you wouldn’t do it. They’re horses at the end of the day.

Those two, three or four minutes are so vital before the race. You have to be calm and relaxed but so on the ball and efficient. Total opposites all in one. They must be gotten in fairly sharp but you can’t have a sense of hurry or stress or panic on you. And it’s the same with the lads leading them into the stalls. You want to lead them in calmly but then you want to get out of there as quick as possible, ‘cos at the end of the day, you don’t want to be locked in a cage with a racehorse that knows they have to jump out of there at 30 miles per hour!

I started out last month in the Curragh and have loved it. I got paired up with John Wixted and he was so good to me. I watched him for the first race and after that he gave me my own horse to lead in. Himself and the lads just kept an eye on me. After that, I was just given my numbers and away we went.

You have to be there an hour before the first race and you’re told what numbers you’ll be leading in. But you have to be ready to jump up if something happens, God forbid. As I said, for those three or four minutes, you really have to keep your eyes peeled.

The lads were so welcoming and friendly. I could ask any questions. They’d look out for you. It’s a proper team. There’s great craic too. It’s just like working in a yard that way.

I work for Conor O’Dwyer and I love it there. The horses are running well and it’s been great to see Ricky Doyle doing so well. They’ve both been a great help to me. I’ve never done so much schooling. Maybe that’s the upside of being in a smaller yard. It’s a great experience. And Conor having been a jockey himself, he understands about giving people the chance to do different things and I’ve definitely come on for that. It has helped my judgement, feel, how different horses act on different ground. It’s great. Conor doesn’t say a whole lot but given what he did in the saddle, when he does, you listen.

After I won the Corinthian Challenge in 2017, I thought I’d just keep the licence but there’s some difference between that racing and riding under Rules! Last year I rode for Monica Dowdall-Blake and finished third in a bumper at the Galway Festival and fourth in Tramore. This year, I’ve been riding for Maria Kelly and am again in two weeks’ time. I’m not looking to make a career out of being a jockey but I do enjoy having the licence and a few rides on horses you know and trainers you’re riding out for.

I never thought about being so busy. Since I’m a child I have always loved horses. They’re my whole life. I don’t know anything else. I don’t see any of this as a job. I’m very lucky. And everyone who’s in this game knows you have to love it to be in it.

We had no background in racing at home in Baltinglass and I have a business degree going to waste on the sitting room shelf and my mother isn’t too happy but it’s going to stay there for another while. This is what I want to do. My mother would love me to use the degree but it’s not going to happen any time soon.

I have done the Irish National Stud Thoroughbred Breeding course and the ITBA apprenticeship programme. Any way to work in racing and with horses, I am happy to be in. And I am thankful to Conor, Pat and everyone that I am in a position to work in a yard, ride in a few races and be a stalls handler all at the same time. I’m living the dream.