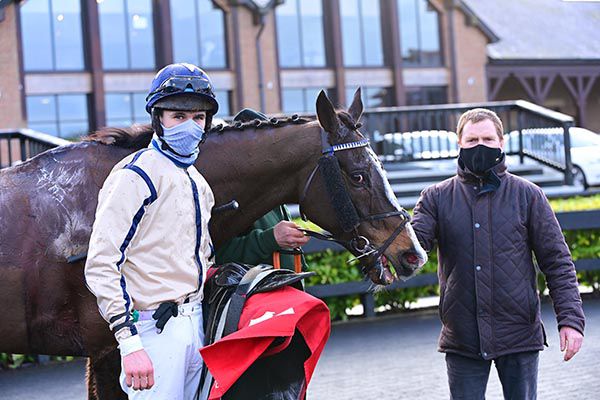 I learned to ride on ponies on the farm and from there I went on to do some pony racing, hunting and hunter trials. I started going into Eddie Lynam’s to ride out at the weekends or during midterm breaks when I was 12 or 13. I actually did enjoy school, though, and went all the way through to complete my Leaving Cert.

I started going into Dermot McLoughlin’s yard near Ratoath when I was 15 and the aim, at that stage, was to be a Flat jockey. Richard Hughes would have been my favourite rider on the Flat when I was growing up. I rode my first winner when Tortueuse, trained by Dermot, made all to win an apprentice handicap at Dundalk in December 2015.

I had a spell in Britain in 2017 where I rode for Karl Burke and was based in Middleham. It was good experience for me as a rider and a person but, unfortunately, I suffered a broken pelvis in a fall when I was there and started to get bigger as well so I decided to come back and try my hand over jumps. My weight is good now and I can eat normally and enjoy my riding.

My first National Hunt winner came at Leopardstown in March 2019 when Amaulino, trained by Keith Watson, won a handicap chase at Leopardstown. I had been on a licence restricted to hurdle races until shortly before then, but I made my case to the authorities that I be allowed to ride in steeplechases and they issued the licence just in time for me to ride that horse. To ride a winner on my first ride over fences was a great way to start, and there was a photo of the race on the front of the ‘Irish Examiner’ the next day because it was run in a snowstorm!

I’ve been based back with Dermot for the last couple of years and I live just a few minutes away from his yard. I also go to Andy McNamara one morning a week and likewise for ‘Sneezy’ Foster. Ken Whelan has been my agent for the last 18 months or so and things are going well this season with nine winners on the board which is my best tally so far. I’ve another four winners left with my 7lb claim so to get down to claiming 5lb is the next aim although I don’t really set targets. It’s more a case of trying to improve technically, fitness-wise and also tactically as a rider.

Christmas week turned out well in the end with a couple of nice winners. It was a bit frustrating initially with a few fallers but then Siberian Star won well at Leopardstown. I’ve struck up a good link with Philip Rothwell who has used me on some of his lightweights and we had a nice winner at last year’s Punchestown Festival with Cousin Harry. Philip was confident that Siberian Star wouldn’t be far away as long as the rain didn’t come and he was travelling like the winner from some way out. 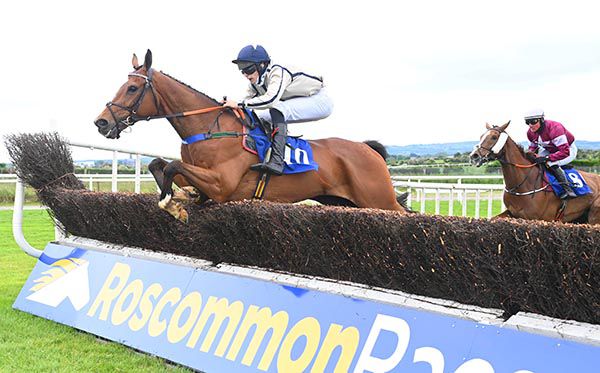 Dermot told me before going out to ride Lord Lariat at Punchestown on New Year’s Eve that it was about time I rode a winner for him so the pressure was on! We weren’t sure that he’d handle the heavy ground but he got through it fine and jumped really well for me. It was great for Dermot and everyone in the yard when Freewheelin Dylan won last year’s Irish National and if Lord Lariat keeps going the right way he could be capable of running well in a big handicap like that.

Thunderosa is another favourite of mine and I won three hurdle races on him last year. He stays all day and has had a couple of spins over fences lately. There should be a day in him in a handicap chase and he’s managed to win on all types of ground. He’s owned by Fidelma Toole and I won the Connacht National at Roscommon on another horse of hers, The Echo Boy, last summer.

It was also exciting to ride Max Flamingo for Francis Casey in the Grade One three-mile novice chase at Leopardstown, where obviously I couldn’t claim, and he certainly showed he wasn’t out of place. He only just missed out on third and there’s a lot to look forward to with him.

There are plenty of people I can turn to for advice in terms of race-riding. I know Barry Geraghty fairly well and he was one of the best around so it’s great to have a chat with him. Conor Maxwell is another mentor along with trainers like Dermot and Andy McNamara.

I spent a year making regular trips every Wednesday down to Enda Bolger’s place in Limerick and that was a real eye-opener as regards learning how to get horses jumping. Myself and Donie McInerney would head there together and it’s an amazing place with such a variety of obstacles and routes. Going out jumping in natural country was great fun and I learned plenty when I was there.

I’m 23 and hopefully things will continue on an upward curve with my riding. As regards time away from racing, I started flying lessons a while back and now have my licence to fly solo. If you have a bad day at the track, it’s great to just head off and take to the skies to get a different view of things. I wouldn’t be quite as far advanced with the flying as Sean Flanagan is but we both enjoy it and it’s something I’d like to continue. I wouldn’t be able to tell you much about how Liverpool are doing in the football, or the latest news about Djokovic in the tennis, but I could tell you every make and model of plane coming into Dublin airport!