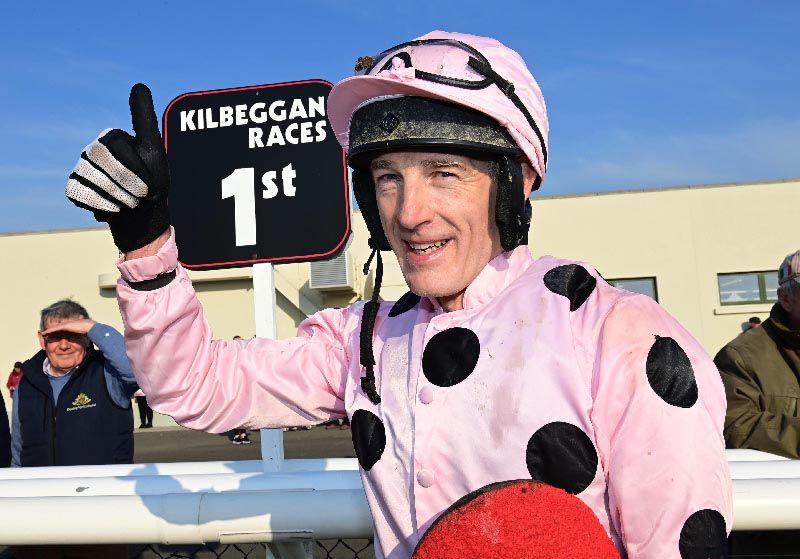 My father used to ride out for Vincent Keane who would be Colin’s grandfather and later on he had a share in a few horses. Our family was based in Drumree, Co Meath but we later moved to the Navan Road in Dublin where I was reared and I’m based in Lucan now.

I would have started riding when I was 12 or 13 and I had my first ride in a point-to-point in 1981. I was placed a few times but never quite managed to get a winner. I’ve ridden plenty of moderate horses and bad jumpers, some of which I had bought myself for small money.

I’ve ridden out for lots of different people over the years and I spent around ten years riding out for Ted Walsh. I enjoyed my time there and Ted put me up on one in a charity race.

I also spent a long time riding out for John Fowler and, later on, his daughter Lorna. They’re great people and I learned a lot there. I’ve had a few different jobs over the years and always managed to combine them with riding out in the mornings.

Dermot Fagan, who’s a stalwart of the yard at Fowlers, was always good for advice and he was at the Derby Sale in 2016 when my father and I bought Eat The Book. I was looking to buy a cheap horse and I followed this gorgeous-looking horse out of the ring after he was led out unsold. He had a fair bit of temperament about him and I wasn’t sure if he was the type of horse that would suit me but Lorna and Harry Fowler both liked him and Dermot Fagan, who was familiar with the pedigree, said that he was from a family that were all ‘as hard as nails’.

He was a bit of a lunatic in his early days and Martin O’Connor, who’s based in Ratoath, had his hands full when he was breaking him. He took his time with him and then we sent him into training with David Dunne. David gave him lots of long, slow work. He brings horses along nicely, trains them on instinct, and this lad didn’t make his debut until he was six because he wouldn’t have been mature enough to run any earlier than that.

It was a while before I was able to ride him and, when I did, he gave me a few falls along the way. He also broke his elbow one day at Thurles which put him out of action for quite a while but he started to show something last year and was placed in three maiden hurdles.

I walked the track a few days before the race at Kilbeggan and worked out where I wanted to be in the race. He hadn’t run for five months but David said he had him fairly fit. Nonetheless I didn’t want to be hard on him if he was going to be a little ring-rusty and I took my time out the back. He can hit flat spots and I was happy to sit where I sat as I thought the leaders had gone quick enough. I started to make a move four out but three horses came down just in front of me at the next flight of hurdles. We were hampered but he was quick enough to sidestep them in fairness and I knew, after surviving that and being able to keep his momentum going, that he would be able to gradually pick up all the way to the line as he stays really well. He jumped well for me, too. He was quick and fast and accurate.

Coming to the last I could see that Mark Walsh on my inside was going fairly well but I felt my lad would pick him up if he jumped it well. Thankfully he did and it was a brilliant feeling to cross the line in front after all these years trying to ride a winner. Jamie Codd said on Twitter that it was ‘a peach of a ride’ which meant a lot, coming from him.

I suppose it had become almost an obsession to ride a winner although I was getting more chilled out about it because I had started to think it mightn’t happen. Still, I never let my licence lapse for more than five or six months at any time over all the years. I kept coming back to the game and being able to ride out, which I do three or four mornings a week at David’s, is a pleasure and a great lifestyle as well as a means of keeping fit. I’m able to combine it with my current occupation which is a healthcare assistant.

I had some sessions with jockey coach Warren O’Connor in recent months which I found really helpful and he was able to pass on some tips about riding and also maintaining my fitness. There was nothing like that available when I started riding and it’s a great resource.

My wife Ann has always been a great supporter of mine and she, along with my children, who are grown up now, and my Dad who has been a racing man all his life got a great kick out of me riding a winner.

There was plenty of media attention afterwards which I didn’t mind but I had a couple of twelve-hour shifts in hospital over the following days which keeps your feet on the ground. The handicapper gave the horse a 10-pound hike in his rating so he’ll have to go in a better race next time but we’ll see what we can do. He’s a novice till October and I’d say he’ll stay hurdling because I like my horses and I’d hate for something to happen to him if we tried him over fences.