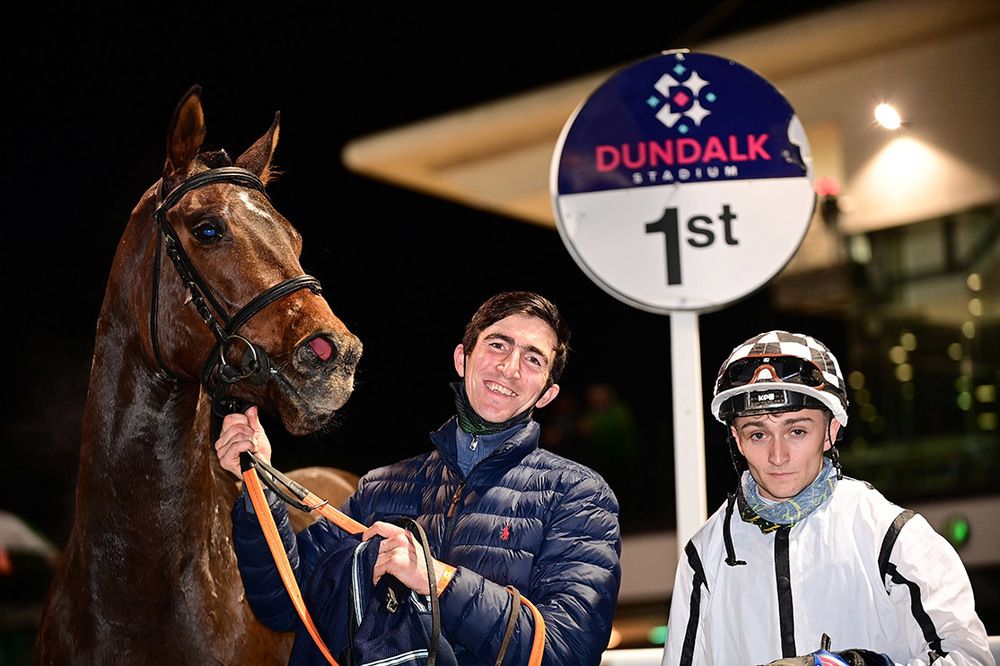 I'm from Baltinglass, Co Wicklow. I actually dropped out of school to do a plumbing apprenticeship with John Lennon who trained a few horses down the road from us. He always had a few horses knocking about. I started off with him as a plumber and the plumbing then went a little bit quiet, so I did an odd morning mucking out for him. Eventually I was thrown up on a horse one day - I never started riding until I was 16 or 17 and we took it from there.

I rode a winner point-to-pointing for Gary McGill and had my first winner under rules at Tipperary in July 2014 for John Murphy, who I was conditional for at the time, on a horse called Kennedys Mor. John wouldn't have had a whole lot of jumping horses at the time. The job with Charlie Mann in Britain was there at the time, he was keen to get a conditional into the place. It suited me very well to go over there with a 10lb claim. It was great, there was never a quiet moment when you were working for Charlie! Listen he worked us hard but he was some character.

I was like a family member when I rode for Zoe Davison. It was just a chance phonecall to go down riding out one day and she was wonderful to me. Even after racing had finished, I'd speak to Zoe on a daily basis, if not twice a day. She was brilliant. In fairness, I never had to question if I was riding the horses, your job was safe with her. As soon as I stepped in and started riding one or two, I was riding them all within a couple of weeks. We got on very well and I think we had a 30 per cent strike rate one season around three years ago.

I loved riding around Plumpton, I used to have right craic going around there nipping up everybody's insides! A few lads would be Effin' and blindin' you but it was great craic! It was a sharp old track and you used to get to know the bends and when people were going to come out and go in. I learned quick enough what way to ride the rollercoaster!

I had 27 winners in Britain, one in Ireland and one point-to-point. The majority of my winners were for Charlie and Zoe. I had a few for Henry Oliver who was a good friend of ours, I rode a good bit for Henry. I never rode a lot of high-class horses, the majority of mine were in lower handicaps.

Baltic Storm (trained by Mann) was a horse we held in high regard but he got injured. He won his maiden hurdle (in Fakenham) by 17 lengths and he won his novice hurdle (at Plumpton) by 12 lengths. He gave me a great feel even working at home, he was such a good workhorse. We always thought a fair bit of him.

I rode a couple of winners on a horse called Frank N Fair (trained by Davison) in handicap chases at Plumpton. She wasn't 16hh, she was a little bunny of a thing but you just had to leave her alone to fiddle away at her fences. She was a right little leaper and was very good over obstacles. I was also third on her in the Sussex National at Plumpton. She would be off a light weight and I would be claiming 5lb the whole time on her.

The finishing point, unfortunately, was Chepstow. The horse just put his foot in a hole after the fence and I had a bad rotational fall on my neck and spine. I had fractured my back on five different occasions, so that was the last fall. When I got the fall in Fontwell two years earlier, I did very well to get back that time. Most doctors were advising me not to go on. It was my own choice (to continue) but when I got the fall in Chepstow, I knew within weeks I wasn't getting back.

I ended up with plates in my shoulders and metal rods in my back and everything. The name 'The Bionic Man' ended up sticking and most of the lads kind of knew me by it.

Since I retired, I've been doing a bit of pre-training and breaking horses. A few different trainers have sent us horses, Philip Rothwell and Michael Grassick and people like that who were always very good to us. A few owners that we were doing them for said would we not try it ourselves, they were quite happy and content with how we were doing a few of the horses.

My first winner with Mullacash Buzz in Dundalk last month was unreal, it was a day I'll never forget. No-one could believe it really. We had him up there for a racecourse gallop and he went up and worked with another nice horse we had. He travelled very well and we thought he might have been well handicapped. He proved us right. It wasn't until he was coming back in that it sunk in with me. It took me a minute to actually realise he had got up.

The thrill of riding a winner is brilliant but to train one is something else and the fact it was my first runner was unbelievable. It definitely took me a lot longer to come back down to earth. Maybe it was one of those things being so long between drinks when you haven't had a winner in a few years after finishing riding.

Martin Flinter, the owner of Mullacash Buzz, is our landlord in Mullacash near Naas. Himself and Maureen couldn't be any more helpful. When I started breaking and pre-training a few years ago I got in touch with Martin about renting a place.

I'd much rather do seven horses well than 12 horses poorly. For the minute we will concentrate on the seven and will try and build it in the new year. Myself and my partner, Nicola, do them between us. It is a small operation.

I always buy and sell a few horses. The more we start bringing in new owners the less I will be buying horses to sell to owners. We will be dual-purpose but we will have more flat horses than jumpers at any one time.

Before I even turned conditional, I always had my heart set on training. It was always in the back of my mind and something I was going to do. You don't just get off the horse and walk away. It is a lot harder graft but it is very rewarding. It's a great thrill to train and I love everything to do with it.

When they turn into the home straight and I see one still in contention, it is a great rush. Your heart nearly jumps out of your chest every time, at least mine does anyway. I think it definitely suits me better than plumbing!