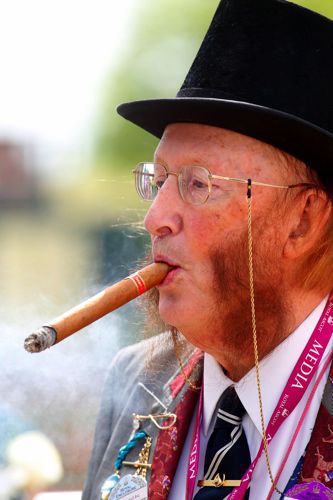 John McCririck passed away last week aged 79
© Photo Healy Racing
Behind the sound of unease within Irish racing about the apparently bleak outlook for UK betting shops it's possible to hear chickens coming home to roost. The media rights deal negotiated last year was fundamentally rooted in betting shop demand for pictures. Now betting shops are closing. Uncertain financial times look to be ahead for a sport which has profited from a cross-channel business model that ultimately had little or nothing to do with sport.

The proof of that pudding is in William Hill's decision to close about 700 betting shops. That represents about a third of its High Street real estate. Its competitors are set to announce similarly swingeing cuts. That is grim news for some of those working in the sector. Otherwise it's a scenario that fails to generate much sympathy.

These cuts reflect just how fundamental Fixed Odds Betting Terminals have been to betting shop profitability in the UK. Reduced to a two pounds maximum from the parasitic one hundred pounds max that applied, those at the top of gambling corporations have examined their bottom line and started slashing.

These are the same corporate brass who remorselessly pushed for maximum profitability from machines that meant they couldn't lose, often preying and clustering on the most vulnerable and/or gullible. FOBT's came to be roundly regarded as a pernicious social blight. But they ensured betting shops were profitable. And that provided a money hose to racing including in Ireland. Not many here conspicuously turned their noses up at how the hose worked.

However the market that prompted Irish racing's media rights deal which runs to 2023 looks to be significantly altered. Without grotesquely profitable FOBT's it seems more traditional betting shop fodder doesn't justify even keeping them open. But if exploitation was the price for maintaining the old status quo then many in the wider world are likely to say good riddance to it.

What the immediate impact on racing here will be, in terms of prizemoney and racecourse revenue in particular, is uncertain.

Maybe the betting shop business model is in terminal decline anyway although predictions of its demise have been continuous for quite a time now, longer even that predictions of a global streaming future. Maybe current revenue really is only the tip of what might be generated in any new global digital betting market? It might even manage to present a more socially responsible face.

But if the market for Irish racing's media rights dips we're into a very different scenario, possibly one in which the price paid for pictures reflects demand. It might prove a timely reality check, negotiating on the basis of actual appetite for the product rather than being tied up in some greater bundle that artificially inflates.

There might unfold a scenario whereby selling racing as a sport rather than primarily as a gambling medium comes to pass. It's a prospect to send shivers down the spines of most racecourse executives although it might even prompt a fundamental rethink of the game's view of itself as a spectator sport.

Talking of broader social pictures though, racing's ultimate public appeal is rooted in one primary issue - animal welfare. The following tries to explain a little how the industry cannot afford to presume too much on public goodwill. The grim outlook for racing's partner in the Horse & Greyhound Fund indicates rapidly changing public attitudes to the regulation of animal welfare - More Than Meets The Eye When It Come To Animal Cruelty

John McCririck, who died last week aged 79, never wavered in his views on welfare, particularly use of the whip. In that sense it could be argued he was progressive although in media terms it was Sir Peter O'Sullevan who was a pioneering figure. Where McCririck was truly ahead of his time was in the creation of his public persona.

In many ways 'Big Mac' presaged our modern media culture. Attention was his currency and he sought it avidly. It's no exaggeration to say that in his Channel 4 pomp he was racing's most public face, including here in Ireland. He cut an instantly recognisable figure and exploited that profile to the max.

Expressions of regret about the loud buffonish exterior overshadowing substantial journalistic talent fail to take into account how the money for such exhibitionism dwarfed what was on offer for any supposedly more worthy alternative. The big man did his tot and profitably gurned on cue.

It was a polarising persona that increasingly came to be regarded as too unfashionable for mainstream television. Maybe that was accurate to a large extent, although it's notable how a determinedly inclusive TV culture struggled to find a corner for McCririck's relatively harmless schoolboy shtick.

From an overall point of view, racing in Britain may even find itself looking back with nostalgia at how someone with a true passion for the sport commanded instant public recognition. The TV menu is now a lot more glossy and on message but can often be correspondingly bland. That was one thing McCririck never was.

His passing leaves Frankie Dettori as British racing's only true Group One performer in the profile stakes. Dettori has been enjoying an Indian Summer in recent years anyway. But this summer is becoming phenomenal for the 48 year old Italian. Too Darn Hot's Jean Prat success at Deauville on Sunday was a seventh Group One victory in just 38 days. All seven have come on different horses.

The most notable was Enable's return in Saturday's Eclipse. She hardly beat a vintage field but the way she travelled through the race was notably impressive and sets her on a route to what could be history with an unprecedented third Arc success. Arguments about Enable's place on the pantheon of greats are already beginning. But such a unique accomplishment would be superb.

What Too Darn Hot achieved in actual forms in what looked a below-par Group One is debatable. But it was in a later Listed race on Sunday that Dettori looked to be the beneficiary of last year's wrongheaded decision by the French racing authorities to alter their interference rules to get in line with Ireland and Britain.

With about two furlongs to go Dettori dived for a gap on the eventual winner Joplin and banged into Cherry Lady who in turn looked to interfere with another runner. Dettori's glance around indicated his worry about having messed up. Despite the incident Joplin went on to win. Cherry Lady for her part though ran on well to be fourth after being lucky to stay on her feet.

Under the old French rules the process would most likely have been clear. Joplin compromised her opponent's chance so would have been placed behind her leaving Dettori to ponder the inadvisability of riding that looked at least careless and maybe more. And that would have been a correct step.

Under the new regime there wasn't even an enquiry. To which one can only say - Incroyable!