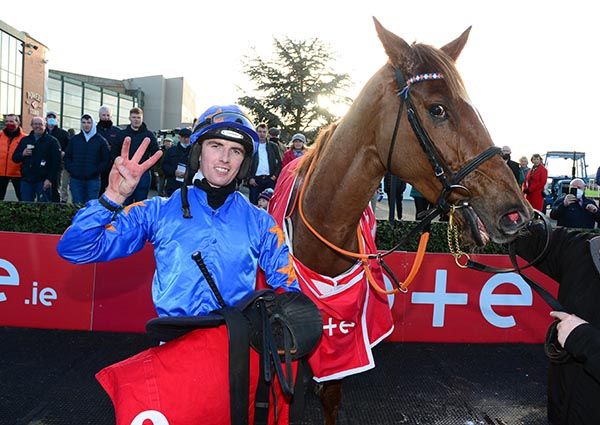 From a horse racing point of view we could certainly do with 2022 being a better year for the sport than the annus horribilis that was 2021. With the notable exception of Rachael Blackmore, 2021 was a year to forget for horse racing.

As in life, it’s easy to say we’ll wipe the slate clean for 2022 and start again afresh, but of course there are lingering problems within the sport that won’t just disappear on a specific date in the calendar. The big one continues to be drugs in the sport and, despite no concrete evidence that there is a wide scale problem, the shadow of Jim Bolger’s 2020 allegations still cloaks the game. Even a benign outcome to the Monasterevin Raid won’t put an end to it. Like Covid, the Lance Armstrong tagline is something racing is probably just going to have to learn to live with.

Hopes of a brighter 2022 for horse racing didn’t get off to much of a start at Fairyhouse on New Year’s Day when images of a racegoer throwing a beer at a horse and jockey passing the winning line was both distasteful and dangerous in equal measure.

This sort of loutish behaviour is something we Irish like to think is confined to our near neighbours, but with a drinking culture second to none it was only a matter of time before racing here experienced similar unsavory conduct.

Anti-social behaviour is commonplace in society whenever drink or drugs are involved, so we cannot expect horse racing to be immune, particularly when the sport actively courts the very type of customer that is most likely to cause the problems.

Fairyhouse Racecourse officials were quick to react to the incident and ejected the offending racegoer from their premises but it’s difficult to know the best strategy for racecourses to employ to mitigate against future incidents. Moving racegoers further away from the action and participants would be the simplest solution but would detract from the overall experience of a day at the races. Why spoil the race day experience for all?

At the same time the sport and its participants need to be protected so perhaps increased security on bigger days would be a more acceptable solution.

Of course the elephant in the room is the alcohol which goes hand in hand with a day out at the races and fuels this type of behaviour.

One man who certainly got his New Year off to the best possible start was jockey Donagh Meyler who hit the ground running at Fairyhouse by riding a treble. With only seven winners from his previous 156 rides this season it will be a great boost to the one time top conditional rider. It’s hard to believe it’s now six years since he hit the headlines when winning the Galway Plate on Lord Scoundrel on what was a chance ride and his first for Gordon Elliott.

Racing is littered with similar stories to Meyler. Jockeys who have undoubted ability but without the backing of a big yard struggle to keep the winners flowing. And as the bigger yards continue to expand the opportunities continue to shrink for those that aren’t attached to them.

Less surprising but equally meritorious was Al Boum Photo’s fourth New Year’s Day success in a row at Tramore. The dual Gold Cup winner is pleasing his connections more this season than he was last and another crack at Cheltenham’s blue riband is firmly on the cards. An interesting post-race comment from Willie Mullins was that while he is very keen to get another run into the ten-year-old before Cheltenham he is not considering the Dublin Racing Festival at Leopardstown as an option - “he’s not going to Leopardstown, it hasn’t got ground for those sort of horses.”

The Champion trainer ruling out a racecourse five weeks in advance in the middle of winter because of unsuitable ground is a poor reflection on one of our premier National Hunt tracks. Leopardstown is without doubt a brilliant venue in an ideal location but the weather continues to cause problems when it comes to national hunt racing at the track. Artificial watering is becoming the norm ahead of the big winter meetings at the course.

Then again, if I was Leopardstown I wouldn’t be too worried about Mullins’ remark as it didn’t stop him running Kemboy, Melon, Janidil and Franco De Port in the Savills Chase or the ultra-exciting Galopin Des Champs on the same Leopardstown chase course last week when the official ground description was yielding, good to yielding in places.

Vincent Finegan's Latest Blog. Racing would be lost without Rachael