Punters given a raw deal by Naas stewards 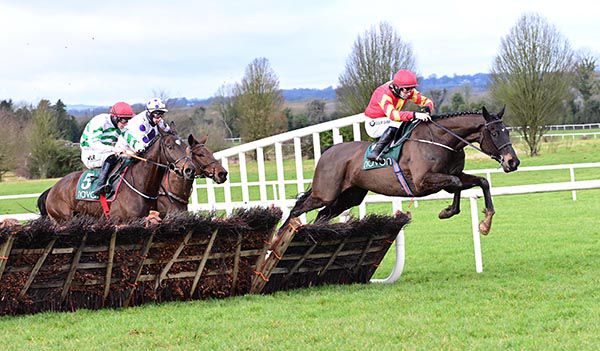 The handling of the 'false start' at Naas on Sunday was a shambles and displayed a total disregard for punters by the stewards.

The starter, Derek Cullen, presumably couldn’t see, or didn’t see, the incident where Shakeytry whipped around and impeded Sean Says and Aarons Day shortly before Cullen released the tape to start the race. Nothing more than human error on the part of the starter, and of course this could have happened to anyone. However, I have less sympathy for his decision not to initiate a false start moments later when he could clearly see three horses had been left behind?

Anyway, the starter is not my main gripe, it is the subsequent actions of the stewards that beggar belief. Unlike the starter, they had ample time to study the incident from multiple video angles, interview all the riders involved and talk to the starter. An open and shut case — a fair start was not enacted and the race should have been declared void.

The stewards copped-out of making any decision on the race and instead referred the matter on to their CEO Denis Egan. This showed a complete disregard for the punters who placed bets on those three horses in good faith but lost their money. If the stewards felt they hadn’t the expertise or authority to make the correct decision they could have surely called on Denis Egan, who was at Naas, for advice rather than referring the matter on to him which means that regardless of his subsequent findings the punters lose their dough.

The Naas stewarding debacle came just 48 hours after the Navan stewards had made a very controversial decision regarding the outcome of the Graigs Lane Maiden Hurdle involving Brazos and Falcano. Brazos clearly drifted off a straight line and impeded Falcano, but despite only a nose separating the two horses at the finish, and Brazos’ rider being found guilty of careless riding, the result was allowed to stand.

To add to the IHRB’s ever-growing list of woes RTE is the latest media outlet to shine a light on horse racing in the aftermath of the Viking Hoard doping case with Barry Lenihan discussing the sport on the Claire Byrne show last week.

Lenihan, like David Walsh and Paul Kimmage, is a journalist with a track record for highlighting issues within sport having previously broken a story about a Champion greyhound testing positive for cocaine.

His radio piece touched on a number of failings of the regulatory body but primarily focussed on the shortcomings in the testing of thoroughbreds at non-training establishments for prohibited substances. The IHRB was given new powers back in August 2020 whereby their staff can effectively replicate the role previously carried out exclusively by the Department of Agriculture’s Special Investigations Unit. Frustratingly, the IHRB has yet to get their act together in rolling out this new testing regime and up to the end of January 2021 no visits to non-training establishments have been carried out.

When the new powers were granted to the IHRB last year it was heralded as a watershed moment in the policing of the doping of race horses. Five months later and still nothing.

Mention was also made to the HRI expenditure budget for 2018 which included a €9.1 million allocation to the IHRB for Integrity Services. This increased allocation “included funding for CCTV installation at a number of racecourses stable yards.”

We now know that this money was not spent on CCTV. According to the IHRB, their board decided to redirect this money into other integrity services. But they have not specified exactly what the money was used for.

In order for the IHRB to re-allocate funds from an approved budget they are required to get approval first from HRI.

Fast forward three years and HRI has upped the 2021 allocation to the IHRB for the provision of integrity services to an inflation-busting €14 million, but still no CCTV.

We saw the devastating impact the RTE Prime Time Investigates Special on Greyhound Racing had on that sport in 2019. Those within Greyhound racing industry argued that the documentary was biased and used old footage of antiquated practices but the damage was done.

The thoroughbred industry, with an annual economic value of €1.84 Billion (Deloitte Report 2017), has a lot more to lose than Greyhound racing but is doing very little to counter the claims that the sport has regulatory shortcomings in relation to doping or anything else.