Form is temporary, class is permanent 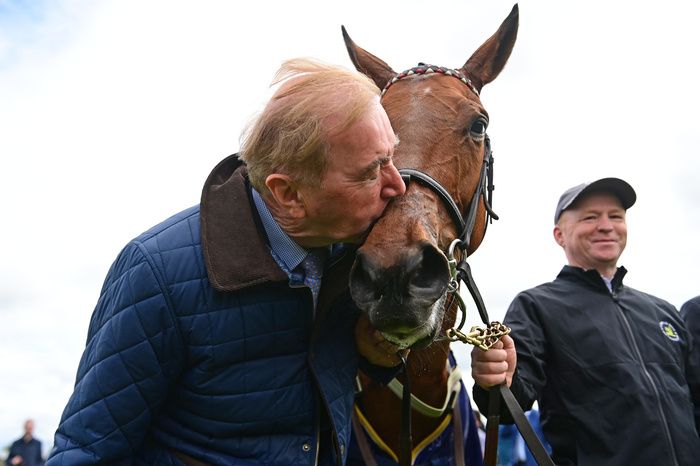 She had shown a glimpse of her electric acceleration when beating Agartha in a Trial race over seven furlongs at Leopardstown at the beginning of April but her performance at the Curragh was truly out of the ordinary. All the more extraordinary when you take into account the poor form of her stable coming into the race. Since Homeless Songs won at Leopardstown on April 2nd Dermot Weld had trained just one winner - Ezine, a short head winner of a maiden race at Naas at odds of 4/6 favourite - from 69 runners in almost two months.

Weld is a past master at nurturing high-class talent and his patience with Homeless Songs certainly reaped due reward with her demolition job at the Curragh, but there is a real sense that she is only going to improve with racing. The veteran trainer turns 74 in a couple of months and this Moyglare Stud filly could well roll back the years to the halcyon days of Vintage Crop, Media Puzzle, Grey Swallow, Go And Go and Vinnie Roe.

The Coronation Stakes at Royal Ascot is set to be the next assignment for Homeless Songs where she could meet last season’s Champion 2-y-o filly Inspiral and the English 1000 Guineas winner Cachet in an exciting clash. If she turns up in the same form she was in on Sunday they won’t see which way she went.

Last week the Government Committee tasked with scrutinising the proposed new Gambling Regulation Bill issued a series of recommendations and observations on the issue.

Many of their recommendations are in line with the current thinking in the UK in relation to problem gamblers and affordability checks but in some aspects they are looking for the legislation to be far more draconian and their proposed total ban on gambling advertising before the watershed will send shockwaves across the horse racing industry.

Should this recommendation make it into law it would hit the racecourses’ bottom line very hard as a large proportion of their revenue comes from bookmaker advertising. Not only are bookmakers some of the biggest race sponsors in the country but they also spend significant money on advertising signage around all the tracks and parade rings. A total ban on advertising before the watershed would also have implications for RTÉ covering the sport. Their television coverage of horse racing is heavily reliant on betting companies' sponsorship and gambling advertising.

One would presume the ban on gambling advertising pre-watershed could only apply to irish-based entities so those watching ITV racing or Racing TV would probably still be exposed to the adverts which somewhat defeats the purpose.

Similarly, the Committee is recommending the better enforcement of current laws prohibiting gambling taking place in pubs. This seems utterly pointless considering almost everyone is now in possession of Smart Phones which facilitate remote gambling in any location.

One area where they appear to have got their recommendations spot-on is in relation to Fixed Odds Betting Terminals (FOBTs). The Committee is calling for a complete ban on these in Ireland. With all the horror stories about them in the UK this is a sensible move.

Elsewhere last week the Irish Horseracing Regulatory Board (IHRB) issued the results of yet another Referral Hearing into a positive sample from a race winner. This time it was Cobalt that was the offending substance and the horse, Slade Runner trained by Kieran Cotter, had above the permitted level within its system when a urine sample was tested following his win at Dundalk on 20th January 2021.

What makes this case most interesting is that the IHRB received notification of the positive sample on 3rd February 2021 from LGC Laboratories and acted immediately by making an unannounced inspection of the trainer’s premises the very same day in conjunction with the Department of Agriculture, Food and the Marine (DAFM) Veterinary Inspector.

When the joint-team of inspectors arrived at Cotter’s premises they found evidence of “a recent bonfire directly adjacent to the horse walker and main barn which contained burnt bottles of animal remedies.” There was also “the presence of numerous used needles and syringes lying around” in various locations and “a large supply of unused syringes and needles in the barn.”

Cotter stated that he was unaware that the needles and syringes were there, didn’t know how they got there and said that he never used them. In relation to the bonfire and the burnt animal remedy bottles it contained Cotter admitted that he “regularly burnt waste and nutbags at that location. He said that the bottles found in the bonfire had been in a bag which belonged to his father and had been left in the boiler house when his father had moved house and about six months prior to the inspection he had burned the contents of this bag without taking much notice of the contents.”

Despite the best efforts of the authorities, which included the forensic testing of residue in syringes and bottles found at the premises, they did not find Cotter in breach of the Rules for a possession of illegal substances in his yard. The Referrals Committee ordered Cotter to pay fines and costs totaling €32,500 for a number of other offences relating to the unannounced inspection. The bulk of the fines - €20,000 - was in respect of the fact that he had failed to maintain his Medicines Register, failed to ensure that he and his staff that had access to medicines were fully conversant with the rules and regulations relating to prohibited substances and that he hadn’t locked his medicines cabinet.

In this case the IHRB did exactly what Bolger, Kimmage et al have been clamouring for. They acted immediately, brought in DAFM and took extensive samples of both horses and medications for further analysis. But no anabolic steroids or any other illegal substances were found.

Galway is a truly special week in the Irish sporting calendar. It’s particularly refreshing as a racing fan to see all the connections of winners getting so excited and revelling in the moment. Fist pumps, flying dismounts and the sheer joy of a Galway winner is infectious. It really is the ultimate seven day party.

Vincent Finegan's Latest Blog. Dropping attendances are a cause for concern

Horse Racing Ireland (HRI) issued statistics last week for the first six months of 2022. These figures were compared to the same period in pre-Covid 2019 to give context and some of the trends are quite surprising.

Vincent Finegan's Latest Blog. New whips rules in UK are a step in the right direction

I have sympathy with the stable staff and their protest at Kilbeggan on Friday evening. The walk from the stableyard to the parade ring at the Co. Westmeath venue is a solid half mile and in the current hot spell that is certainly thirsty work.

On Friday 20th March 2020 trainer Denis Hogan ran two horses in a Claimer at Dundalk. The bookmakers priced up the 92-rated Yuften as their 1/2 favourite with Hogan’s other runner Tony The Gent initially priced at 5/2.