Photo finish one to savour in Gold Cup repeat 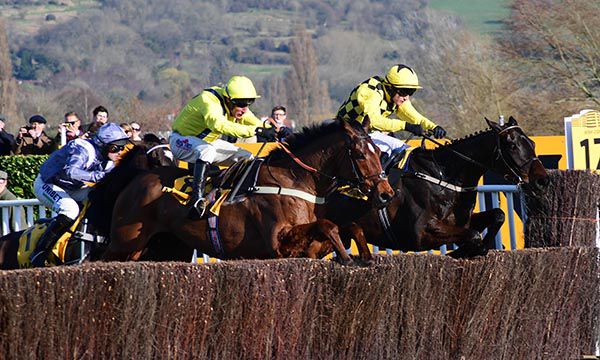 Al Boum Photo galloped into National Hunt folklore as he joined the elite band of horses to record back-to-back victories in the Magners Cheltenham Gold Cup.

Giving Willie Mullins a fantastic four-timer on the day, Al Boum Photo (100-30 favourite) had to dig deep to see off the opposition in a close finish up the famous hill.

Al Boum Photo, Santini, Lostintranslation and Real Steel had led the pack heading to two out, where Presenting Percy fell.

Paul Townend set sail after the last and the winning post came just in time as Santini closed the gap to a neck at the line.

Lostintranslation was a length and a quarter away in third place, with the always-prominent Monalee fourth and Delta Work fifth, having struggled to get into contention following a mistake at the second fence.

“Unreal, it’s a credit to Willie. To come here with one run (this season), the man’s a genius.”

He added: “I went out with a plan to get in a rhythm, but he missed a few fences, luckily he always found his feet.

“At the top of the hill he started to jump better — I ended up in front sooner than I wanted, but I was able to hang on and he produced at the last.

“It was completely different to last year, but most importantly it was the same result.

“He’s a legend, he has everything — guts along with class.”

Mullins said: “It’s fantastic, an absolutely unbelievable day. That man there on the screen,

Paul Townend — people said he was under pressure. Paul does his own thing, he probably rides better under a little bit of pressure — really really good from him.

“It’s not easy to take over from someone like Ruby Walsh, but Paul’s gone and stamped his authority this season in Ireland riding for our yard, so I’m really delighted for him.

“I left him alone, I asked what he was going to do. I think the horse wanted a bit more of the action as it unfolded, he didn’t disappoint the horse. He let the horse do it and that’s a rider riding with huge confidence.

“It worked out, so I’m really happy and delighted for Paul.”

On having the same preparation as last year, he said: “We just decided to follow what happened last year, why change it if it works? Thankfully it paid off.

“I think it was only history against him today. I didn’t think the race was as tough as last year, Paul was brave on him and the whole thing came together. It’s Paul’s day today.”

Nicky Henderson said of the gallant Santini: “You have got to be very proud of him and pleased for everybody, it was a great run. You couldn’t have done anything else. He never touched a fence, he was in the perfect position the whole way.

“He fought like a lion. There was nothing else you could do. The winner was better by a neck on the day.

“To be fair this is only his sixth steeplechase and he has only got to improve a neck and (another 100 yards) and he was nearly going to get there. After what Champ did (in the RSA), I couldn’t hope for that twice.

“He was a couple of lengths down at the last and has got back to within a neck. Nico (de Boinville) gave him a beautiful ride. It was a very good race.

“There is a very big difference between first and second, but Willie is a great mate and Joe (Donnelly, owner) has got a couple of lovely young horses with us, so I’m thrilled for them, as they great people.

“This will be the only objective next season and I’ve told Willie he isn’t allowed any prep race, not even in January!

“Somebody has to finish second — it is a hard place to be, but we can’t complain.”

Colin Tizzard was also proud of the effort of Lostintranslation.

He said: “It was a brilliant run in the end. We’ve had a hard old week, as nothing has been going right and we have had a few dirty noses at home and we thought, ‘should be running this one’, as that is how bad it got today.

“Then he come and runs like that, with the choke out a bit. He had every chance. He was just beaten by two better horses. It was a fantastic run.”