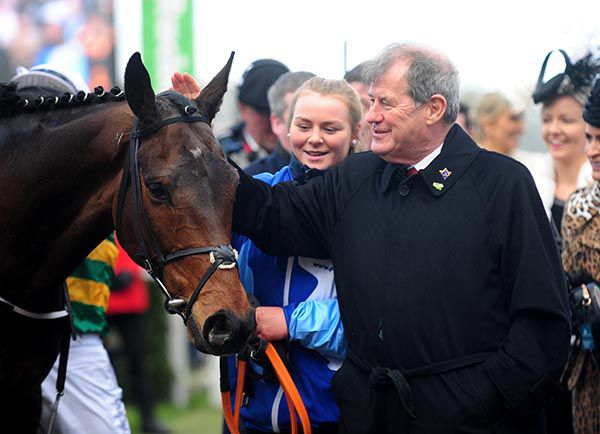 Sire Du Berlais delighted favourite-backers with a last-gasp victory under an inspired Barry Geraghty in the Pertemps Final at Cheltenham.

Trained by Gordon Elliott and owned by JP McManus, the seven-year-old had caught the eye when finishing sixth in a Pertemps Qualifier at Leopardstown in December and was a heavily-backed 4-1 market leader for what was his first start since.

It was not entirely straightforward for Sir Du Berlais, with Geraghty having to get to work a long way from home.

But to his credit, the seven-year-old responded to his rider’s urgings and charged up the hill to get up and beat 40-1 shot Debra Hamer’s Tobefair by a neck.

The strong-travelling Not Many Left and Cuneo were not far behind in third and fourth respectively.

It was a quick double for Geraghty in the McManus colours, after Defi Du Seuil in the JLT Novices’ Chase.

He said after what was his 38th Cheltenham Festival winner: “I thought I was in trouble three out, I got tight for room but he rallied and rallied, and it was a good performance.

“There was plenty of traffic, but he responded and was a willing partner.”

Elliott said: “I was happy the whole way through the race. He was short of room at the top of the hill, but Barry gave him a great ride and he never panicked. I knew when it opened up he would stay going which was brilliant.

“I thought until 50 yards before the line we were still under a bit of pressure. It looked the race to go for with him, so it is great. I’ll speak to the owner and see what we do next, but to win the Pertemps is great.

“We had a very slow start, but it goes to show if you keep your head down and keep trying you will get there.”

Hamer said of the runner-up: “This is the horse that we see at home, but it wasn’t him when we brought him for this race two years ago. He’s amazing and I’m thrilled to bits with him.

“I’m so excited, all the owners are here, about 10 of them, so we’re going to have a glass of champagne now.”