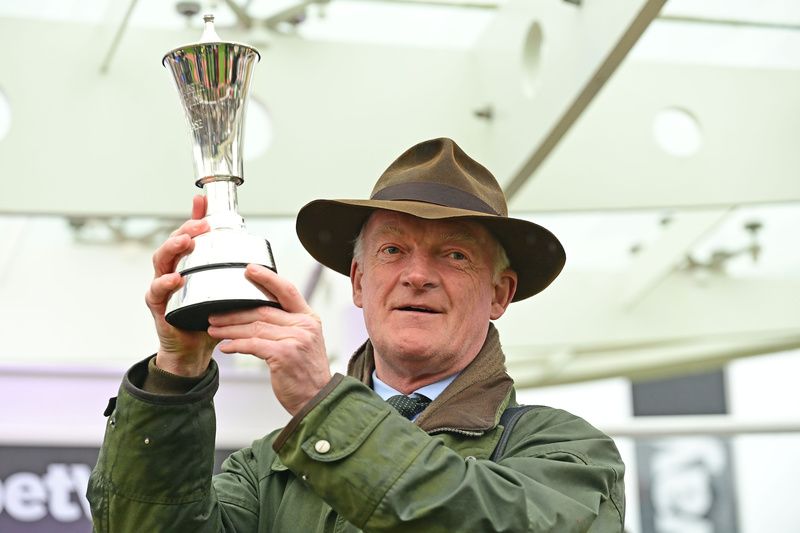 Willie Mullins was crowned leading trainer at the Cheltenham Festival for the ninth time after a magnificent five winners on the final day. The Closutton handler ended the week with a record ten victories — taking his career tally at the meeting to 88 — while Paul Townend picked up leading jockey honours.

Mullins had to wait until the last race on day one to get off the mark when Stattler, ridden by his son Patrick, claimed the National Hunt Chase.

Wednesday saw him lift the Ballymore Novices’ Hurdle with Sir Gerhard and he also won the Queen Mother Champion Chase for the first time with Energumene, meaning Mullins has now completed the clean sweep of every major race at the Festival.

He went on to complete a second day treble when Facile Vega provided him with a twelfth victory in the Weatherbys Champion Bumper.

It was not all plain sailing for Mullins, as Galopin Des Champs was over ten lengths clear in Thursday’s Turners Novices’ Chase only to stumble after jumping the last.

Compensation was swift for Mullins and Townend, when Allaho was once again hugely impressive in repeating his win from 12 months ago in the Ryanair Chase.

The fourth and final day also got off to a flyer for Mullins and Townend when Vauban impressed as a winning favourite in the JCB Triumph Hurdle, closely followed by State Man for the pair in the County Hurdle.

Mullins then won the Albert Bartlett with The Nice Guy (Sean O’Keeffe) and the Hunter Chase with Billaway (Patrick Mullins), before Elimay won the Mrs Paddy Power Mares’ Chase under Mark Walsh.

Townend took the top rider award for just the second time, having first been successful in 2020.

He finished with five winners having also partnered Sir Gerhard, Allaho and Energumene.

“Any winner is always good at Cheltenham and Paul has ridden beautifully when you think what happened with Galopin Des Champs earlier in the week.

“With Paul it seems when something goes badly for him it spurs him on even more. That’s sport, I suppose.

“You could tell by the time he rode State Man he was full of confidence. He dropped him right out in a big field and came right round the outside.

“I didn’t realise no one has ever trained this many winners here, but since it became a four-day Festival things changed numbers-wise.

“I’d imagine this sort of thing will happen more regularly and if they go to five days someone will do it easily!

“I’m delighted with the whole team and I’m going to accept the award with all my team because they are the ones who do it in the background leaving me free.”