Saint shines for Geraghty and Mullins in County Hurdle 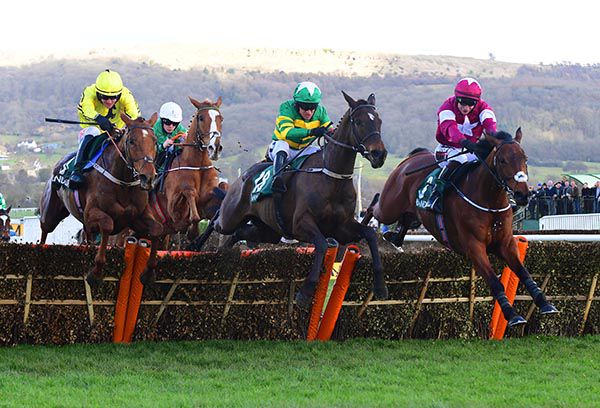 Saint Roi landed a gamble to continue a superb Festival for connections with a convincing victory in the Randox Health County Handicap Hurdle at Cheltenham.

Saint Roi may have been lightly-raced, but money talked and the JP McManus-owned five-year-old delivered in style.

Coming to the last, Embittered held every chance, as did a few others, but the Barry Geraghty-ridden Saint Roi was going best of all and the 11-2 favourite pulled away to win decisively by four and a half lengths.

Willie Mullins also saddled the runner-up, Aramon, with Gordon Elliott’s Embittered a head away third and another of the Mullins’ team, Buildmeupbuttercup, another head back in fourth.

Riding his fifth winner of the week, Gearghty said: “He was electric, for a horse with little experience, the pace they went, he was very good. Willie was sweet on him and he’s not a bad judge.

“It’s what you dream of, you come here and one winner is all you want. It’s brilliant when they keep coming. There’s no doubt about it, it’s a privileged position to ride such good horses for good people and it is a pleasure.

Mullins said: “I enjoyed that a bit more than the last one (fortunate victory in Triumph Hurdle). It was a proper race — he is a good horse. We were very lucky to win the last one.

“Barry is riding out of his skin. I said to JP on Monday evening we might have one for you. This fellow did a lovely bit of work during the week and I think he said to me he wouldn’t back him in case he stopped him. He did what he showed me in his final bit of work the other day, which was way better than before, and Barry executed the job fantastic.

“They all arrived down at the second last with fighting chances and you wouldn’t know which one to back. He is better than that, but he was handicapped nicely — I thought we had enough ammunition for the Supreme, but there we are.”