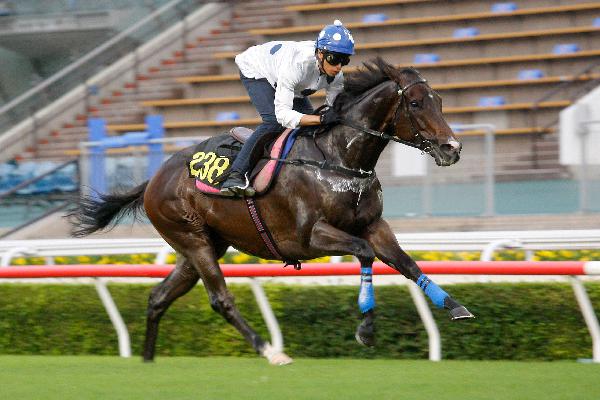 By Declan Schuster
Vincent Ho is readying for one of the most prominent chapters of his riding career which will begin writing when Golden Sixty makes his reappearance later this month before his bid for a third straight G1 LONGINES Hong Kong Mile (1600m) success in December.

Speaking on Tuesday (1 November) at Sha Tin’s barrier trial session, Ho discussed the honour he feels each time he dons the silks of Hong Kong’s champion — a now iconic set of white, blue and gold that carry the hopes of a city infatuated with horse racing.

“To be honest, every time I put on those colours, it’s something special,” Ho said.

“It gives me goosebumps when I put them on — it really is my privilege to be on him and I am still very humble about how lucky I am to be able to ride him, to meet this once-in-a-lifetime horse with his connections and the stable — we cherish it a lot.

“Even people that aren’t in racing, they’ve heard about Golden Sixty. It’s all about him, it’s about him being a great athlete. He’s the one who should take all of the honour. I’m really lucky and especially thankful that Francis (Lui) and (owner) Mr Chan support me.”

Following his Four-Year-Old Classic Series sweep and subsequent return to racing in September of 2020, Golden Sixty was touted as heir apparent to the great Beauty Generation — who previously held Hong Kong racing’s throne for numerous seasons.

“When Golden Sixty started racing and COVID-19 began to hit, I hope it gave a lot of people some joy and that it was something to look forward to when he raced. Horse racing is a sport and it’s supposed to be like this, it’s about him, he’s the athlete and he’s there for a lot of people to support. I hope more people will support him — he’s like an icon, he’s amazing,” Ho said.

Ho, 32, has been in the plate for each of Golden Sixty’s appearances across his record-breaking 24-start career featuring 21 wins and six at Group 1 level, all of which has returned an unrivalled HK$113,400,600 in prize money — a Hong Kong racing record.

“Every season when I come back, I want to know how he is doing but everything is always positive and I am really grateful for that. We’ll do our best to get him there with his fitness right on point and do our best to win what we plan for him,” Ho said.

Sounding an ominous warning to rivals, Ho feels as though Golden Sixty — as a seven-year-old — moves like a juvenile that’s readying for his two-year-old debut, not next month’s HK$30 million LONGINES Hong Kong Mile.

“He’s still got his fresh legs, like new horses, very fast legs — it doesn’t feel like he is seven years old at all, he is very light on his feet.

“He’s more mature but with weather like the other morning (18 October) and this morning (high winds), he shows that he is still very sensitive. He’s a very sensitive horse with the environment and especially with new changes but he can adapt very fast and that’s what is good about him,” Ho said.

Ho partnered Golden Sixty in a routine gallop on the dirt at Sha Tin yesterday morning (Tuesday, 1 November) as the countdown to his race day return continues.

“I rode him in trackwork this morning, he feels very well. Everything is on track — he felt great and I can’t wait to bring him out and let everyone see him again, it’s exciting and I think everyone will be excited to see him again — it’s been a while,” Ho said on Tuesday.

Ho is likely to hold a strong hand at the HK$110 million LONGINES Hong Kong International Races — led by his association with Golden Sixty — which will most likely see him feature with a quartet of rides across the four Group 1 contests.

Golden Sixty is trained by Francis Lui and owned by Stanley Chan.

“The 2400 metres in December (LONGINES Hong Kong Vase) will suit him.

“The horse feels really good, he ran well last start and he should run very well again. Even though it was a bit too short he was still strong through the finish line,” Ho said.

The Toronado gelding placed in the 2021 G1 Queensland Derby (2400m) one run prior to export from Australia. His career-high in Hong Kong returned a strong-closing third in the 2022 G1 Standard Chartered Champions & Chater Cup (2400m) behind Russian Emperor.

“He’s one of the best horses in Hong Kong over 2400 metres along with Russian Emperor, of course, the overseas horses are always strong in the Vase though,” Ho said.