Bayliss back on Champion’s Way for Chevalier Cup 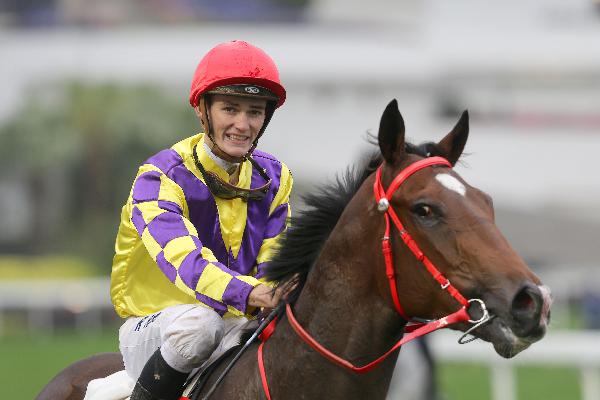 Regan Bayliss takes the hot seat on Four-Year-Old Classic Series hopeful Champion’s Way in Saturday’s (22 November) Class 1 Chevalier Cup Handicap (1600m) at Sha Tin and the young Australian is excited about reuniting with the horse who gave him his second Hong Kong win.

The John Size-trained gelding won his first five races last season in Hong Kong, tasting defeat only once, at the hands of stablemate Red Warrior, and signed off by winning the G3 Lion Rock Trophy (1600m).

But the generational front-runner disappointed fans first-up this term when a lacklustre ninth in the Class 1 Panasonic Cup (1400m), behind the course record-setting Encouraging. Bayliss, though, is not discouraged by that run.

“He showed last season that he was a rising star, his first-up run maybe looked a bit disappointing but they seemed to roll along at a quick pace and not much made ground, and also he was first-up. I think he has a long campaign ahead of him,” Bayliss said.

“I like him at the mile and second up - he’s drawn a nice barrier also, so hopefully he can bounce back,” the Australian hoop said.

Joao Moreira has ridden Champions Way in six of eight races but a suspension for the Brazilian has opened the door for Bayliss to climb back aboard for the first time since 10 March when the gelding sealed a double, initiated two races earlier when Rise High gave the rider his first Hong Kong win.

“Unfortunately for Joao (Moreira) he got suspended and I’m glad I could I pick up this opportunity and hopefully I can make the most of it,” Bayliss said.

The rider has faith in the Hinchinbrook gelding’s ability to improve on his visually uninspiring first-up performance.&nbsp;

“I think he’s the real deal, he might have had a few people jump off him last start but as I said, he is in very good hands with John Size and I’m sure he’ll bounce back,” Bayliss said.

Bayliss knows a good horse and described Champion’s Way as the “real deal”. He previously partnered the former Hong Kong galloper Redkirk Warrior to all three of his G1 wins in Australia - back-to-back Newmarket Handicaps at Flemington and a Lightning Stakes success.

This season in Hong Kong though hasn’t been straightforward for Bayliss, the young Australian has had limited opportunities in the plate, 64 rides in total, grinding away on what is widely considered to be the most competitive racing circuit on the globe for a jockey.

Bayliss has two wins next to his name this campaign, the second aboard the Manfred Man-trained Mr Wealth, who he will reunite with in Saturday’s (23 November) Class 3 Chevalier Environmental Engineering Handicap (1200m).

“His last performance was really good - his trackwork and trials indicated that he was going to be competitive and it was good to see him go to the races and show us what he’s been showing us and get the win,” Bayliss said.

“He feels well and he definitely hasn’t gone backwards in his work - if anything he’s taken a step forward so I’m looking forward to riding him.”

The Tamayuz gelding has been assigned top-weight duties following that win and will be looking to climb into Class 2.

“He has nine pounds extra this time but he also strips fitter from that run so I think naturally there is improvement off that run, he’s drawn a nice barrier (6) so if he gets a nice run in transit and things work, it doesn’t look a stronger race than last time. I think he’ll be thereabouts again,” Bayliss said.

“A couple of his runs at the end of last season, he was running up to a good level of form. He’s come out this season and run one good race for me over 1400 (metres) when he got the right track into the race and hit the line quite strongly,” Callan said.

Lobo’s Legend won the G1 SA Classic (1800m) pre-import, the second leg of the South African Triple Crown, but the Irishman is of the opinion that the David Ferraris-trained gelding is more effective over shorter distances.

“I think he’s a 1200-metre horse, all his best form has been over 1100 to 1200 (metres) and I think when he won his 1800-metre Group 1 he landed in the lead combined with his natural gate speed - which meant he could just sit there and then he sprinted away from them and since then he hasn’t gone to 1800 metres,” Callan said.

The Trippi gelding will face 13 opponents in Saturday’s maiden-breaking assignment, including Golden Sixty, who is looking to become the second horse this season to win his third consecutive race, following Hardly Swears who tallied the hat-trick on Wednesday.

“Golden Sixty is obviously a horse that’s going into the Four-Year-Old series, he’s on an upward curve and he looks hard to beat but you can’t be scared of just one horse - we’re in there to win,” Callan said

“He’s a very straightforward horse, he’s very easy to deal with, he has a lot of class and he put in a good run last time which I expected, but I didn’t expect Encouraging to run that fast and keep going!” Callan said.

The John Moore-trained gelding was second-up last time and seemingly enjoyed the return to the trip after being outpaced at 1200m the time before.

&nbsp;“At the 250 metre mark I thought I could run past him (Encouraging) but I noticed early on in the race that my saddle had gone back quite a long way and by the time I got to the 100 (metre) mark I was wondering whether it was going to stay intact, but luckily it did,” the Irishman said.

“When I pulled up on him the saddle was so far around his loins I don’t know how he even got to finish off the race so well,” he added.

Neil Callan and John Moore have teamed up twice already together this season following the successes of Happy Warrior and Thanks Forever.

“We’ve had a good run, horses are going well, a couple of nice winners as well - long may it continue,” Callan said.