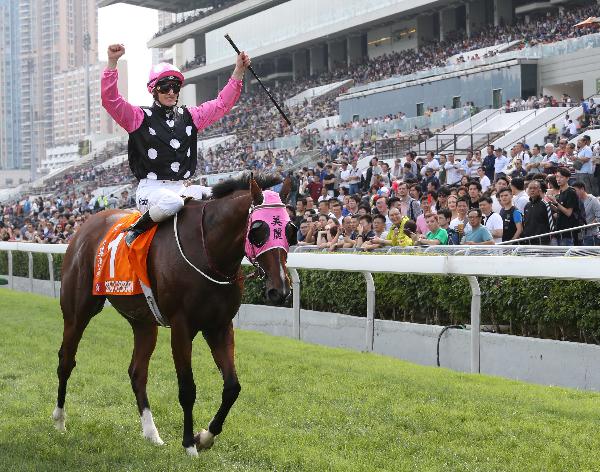 Beauty Generation has enjoyed his summer downtime judging by the sheen of his coat and the barreling depth to his girth.

“I don't think I’ve ever seen him look this fat, to be honest. He’s a big boy, he’s carrying a lot of condition,” jockey Zac Purton said of Hong Kong’s current supreme champion.

The Patrick Kwok-owned seven-year-old has not raced since an impressive victory in the G1 FWD Champions Mile on 28 April. That was his eighth win of an incredible season, a record haul for a single Hong Kong campaign, and pushed his career earnings to a new local high of HK$84,770,000.

After four months without competition, the Road To Rock gelding is entitled to be a little soft around the edges. But the summer girth is already receding back to the athlete’s frame, lean and tight again. Preparations are gearing towards his comeback run a little more than four weeks hence when he will attempt to win the Celebration Cup for a third time.

“He’ll be first-up on the first of October, the 1400m Group 3,” trainer John Moore said. “He’s done very well, he’s about 30lb over his weight but that will come off, he’s looking good!”

Despite the cheeky “fat” jibe, Purton was in agreement. The champion jockey knows the drill; he knows that Moore will have the New Zealand-bred ready to run a race when he returns but the rider is not making any assumptions about continuing the unbeaten streak.

“The horse is definitely well, he looks really good, he’s glowing in his coat and his character suggests he can't wait to get on with things,” Purton said.

“We’re only just over a month out from his first run and he’ll go into that race underdone, as he did last season when his class carried him through. He’ll have to give more weight away, the way the ratings are this season, so it’s not going to be an easy start for him.

“But he goes so well fresh that I’m still sure he’s going to run well. As we go towards December, John will just keep tightening the girth on him and we’ll have him peaking on the right day.”

A third success in December’s G1 LONGINES Hong Kong Mile (1600m) would match Good Ba Ba’s feat and would secure for Beauty Generation an eighth Group 1 win. That would further augment the two-time Horse of the Year’s unshakeable status as one of Hong Kong’s all-time greats.

“Last season he was able to do what no horse was able to do in Hong Kong before and the fact that he did it all at Group level adds even more merit to his performances. He had track records, numbers of Group 1’s, record number of wins, another Horse of the Year title, he couldn’t have done any more than he did.” Purton said.

And another successful campaign could see Beauty Generation meet the desires of his many fans by taking in a race on foreign soil. Moore has Dubai in mind as perhaps the most suitable destination, should the idea come to pass.

“This season it sounds like the owners are keen to travel abroad,” Purton said, “so that’s going to open up a whole new box of challenges for him and let’s just hope he’s in the same form this season as he was last season and he can do Hong Kong proud again.

“There’s excitement and anticipation at what’s going to happen,” he added.m two record - and Ka Ying Master (130lb) who in June won his sole start to date.

Two interesting Hong Kong debutants on the card are the imports Butterfield (122lb) and Playa Del Puente (118lb) in the Class 2 Tai Mo Shan handicap (1400m). The former is a Brazilian G1 winner, while the latter wrapped up a hat-trick of wins in Ireland with a Listed success in March.

Shum’s unbeaten four-year-old Regency Legend will test his mettle against high-class rivals in the day’s feature, the Class 1 HKSAR Chief Executive’s Cup Handicap (1200m).ng off, and I was fortunate enough to be able to ride work every morning while I was in the UK on some of the better quality horses for Sir Michael and for William Haggas,” he said.

Whyte is continuing to ride track work in Hong Kong and views that as a big plus.

“I’m very fortunate that I’m still fit enough and eager enough to be on the horses. I think the most beneficial thing is not riding the better ones but riding the more difficult ones, and I’ve never had the satisfaction of the last few weeks. I’ve had a few really difficult ones turn the corner and become nice rides and that for me is a real satisfaction.”

Come race day, Whyte will have to the hand reins to others. Alberto Sanna will get the first leg-up, on Le Panache. The Italian has three mounts for the rookie handler; Regan Bayliss, Vincent Ho, Zac Purton and Chad Schofield are the others tasked with guiding the first cohort of Whyte racers.

“I don't have anyone I’ll use more than another. I do have a lot of guys riding work for me, which I’m grateful for, and those guys that are doing the work will certainly get more of the support and the rides when available.”

Whyte was ice-cool at his imperious best as a rider and any sense of a pressure to win early, he said, is not an issue for him going into Sunday.

“I’m a sportsman, I’m a competitor and competition is what drives me. Of course, there’s pressure to succeed but there’s not significant pressure that I have to go to the races (this Sunday) and win. I’m under pressure for my horses, not for me, I want them to run well and I want to see how they cope with everything thrown at them the first meeting.

“There’s always pressure to make things work, that’s my nature,” he added. “I don't like failure and not being successful, I proved that as a jockey. There’s excitement and anticipation.”