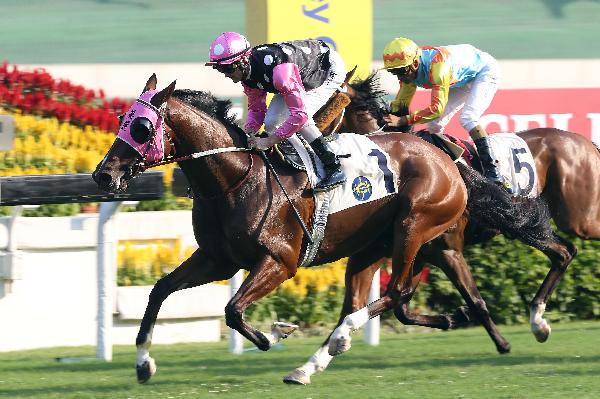 Beauty Generation is “raring to go” as he bids to extend his unbeaten sequence to 11 in Sunday’s (20 October) G2 Oriental Watch Sha Tin Trophy Handicap (1600m) at Sha Tin.

“He worked on the turf this morning and my work rider Romain (Clavreul) was very pleased with him. When he came into the straight he was ready to motor, he wanted to go through the gears so he’s thriving,” trainer John Moore said.

The handler sent out the champion at 6am Thursday (17 October) and was satisfied that the ‘Master Miler’ is in shape to bag a hat-trick of wins in the weekend feature.

“He’s gone through the same prep as last season and Romain’s feedback this morning was very positive. He said he’s fitter than he was first-up so again he’s the one to beat,” Moore continued.

“I went out there on the bike and came back with them as they walked back and Romain said he’s itching to get out there and break his mile track record – and he might need to do that to beat those low-weighted horses in this race.”

Beauty Generation shouldered top-weight when collecting a third G3 Celebration Cup Handicap (1400m), in track record time, less than three weeks ago. The Patrick Kwok-owned bay will concede between 14lb and 20lb to Sunday’s rivals when he bids for a hat-trick of Sha Tin Trophy wins.

“When you concede this much weight there’s always that chance of a defeat but I can assure the trainers of the other horses in the race that he’s going in fitter, and even though he’s carrying the grandstand on his back, I still think he’s some force to reckon with,” Moore said.

Hong Kong’s two-time Horse of the Year is now seven years old but Moore has seen no signs that the New Zealand-bred is slowing down.

“Everything is 100 percent, he’s so sound and age is not a factor at this stage. I’m not even thinking about that this season – he’s absolutely flying and he’s so well in the stable,” he said.

“He was slightly underdone the other week and he’s raring to go now. He was entitled to be tired at the end of the Celebration Cup because it was his first run and he wasn’t 100 percent fit. But he’s just too good.”

Beauty Generation weighed in at 1,161lb, his heaviest racing weight, last time and Moore expects the son of Road to Rock to strip fitter and lighter this time with next month’s G2 Jockey Club Mile still to come before he lines up for an attempt at claiming a third win in December’s G1 LONGINES Hong Kong Mile.

“That condition he was carrying first-up, that will benefit him as we go on to December,” he said. “His weight has come down that little bit more so he’ll be a little lighter this weekend – he’ll go out on race day something like 1,140 pounds, which is spot on,” the trainer said.