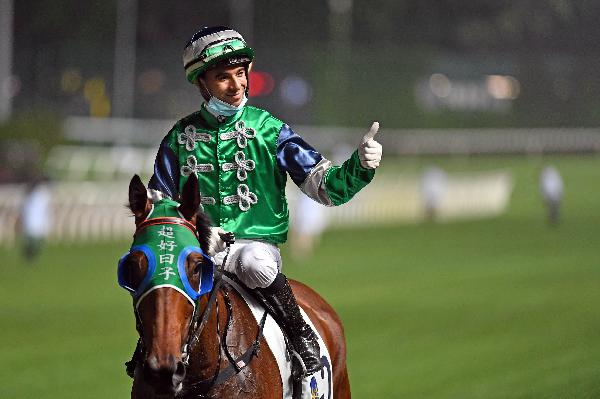 The winner of six races last term, Cheerful Days enjoyed a meteoric rise through season 2021/22 and Badel — with tempered expectations — is confident of a solid first-up effort from the Smart Missile gelding.

“I think the horse has something to offer, I think after a break he should be able to run a decent race. Obviously it’s his first run back which will pose a question mark but this is also the case for most of the field,” Badel said. “I expect him to run a good race because of his rating and also because he improved so much last year.”

Cheerful Days will compete as the lowest-rated runner in the race and sits seven points shy of California Spangle, who ranks second behind Will Power (rated 114) on 111.

“I haven’t been able to trial him (Cheerful Days) yet but I saw his effort at Conghua and I felt it looked good enough. He was so consistent last year, so it’s difficult for me not to see him running a good race again,” Badel said.

Still a four-year-old, California Spangle’s rise looks far from over. His ability was on show last season with four wins — three over 1200m — while he also successfully stepped up to nail 2022 Hong Kong Classic Cup (1800m) glory. Following that performance he produced another incredible effort in the 2022 BMW Hong Kong Derby (2000m), dueling it out with Romantic Warrior before finishing second in what was arguably the most memorable renewal of the race for quite some time.

A dominant force over 1200m in Hong Kong with untapped ability, California Spangle tackles 1400m for the first time this weekend but has sounded an ominous warning to rivals following a pair of strong barrier trials at Conghua in preparation for his return, extending nicely in his most recent effort to cross the line first by close to six lengths over 1000m on turf in 59.23s.

“I think he’s improving, his trial was good enough, the draw is a little bit awkward — I haven’t had much luck with the draws at the moment but that’s the way it is,” Badel said.

Turin Warrior closed out last season with a slashing course and distance third at odds of 36/1, form he is looking to replicate first-up for trainer Richard Gibson tonight when he steps away from gate nine.

“His trial was good, I think this horse will be very competitive sooner or later. He ran very well at the end of last season, so let’s see if the race can set up for him from gate nine, we need a bit of luck from that draw,” Badel said.

Last season Badel enjoyed one of his finest campaigns with 50 wins, including a pair of Group 1s aboard Wellington as well as a swag of other Group race wins.