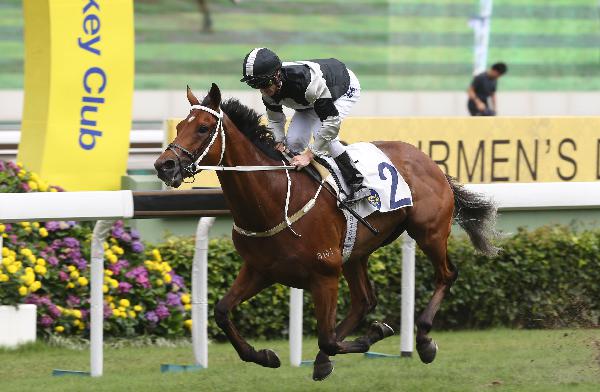 Exultant pleased his connections at Sha Tin this morning (Friday, 11 October) as he ramped up his preparation toward an attempt at becoming just the third horse to win the G1 LONGINES Hong Kong Vase back-to-back.

The son of Teofilo went through his first barrier trial of the season in typical fashion, travelling at the tail of the six-horse field under Zac Purton and rolling by the winning post in fifth behind the head-bobbing Good Standing (clocked at 1m 10.63s) and Time Warp.

“He was just out there to go through his routine, being as fresh as he is, he showed a little bit of speed, which was nice but we know him too well and as he gets into his prep he loses that a little bit,” regular rider Zac Purton said.

Trainer Tony Cruz outlined that the five-year-old’s programme is likely to include one more barrier trial before his planned return in the G3 Sa Sa Ladies’ Purse Handicap (1800m) on 3 November. After that, he will go on to the G2 Jockey Club Cup (2000m) on 17 November and the G1 LONGINES Hong Kong Vase on 8 December.

Cruz was pleased with the Irish import’s wellbeing as he aims to plot a path that could see his Champion Stayer join Luso (1996, 1997) and Doctor Dino (2007, 2008) as back-to-back winners on the Vase honour roll.

Hong Kong folklore is not all Cruz has in mind for Exultant. The handler has signaled international intent this term with the possibility of a tilt at the US$6 million G1 Dubai Sheema Classic (2410m) at Meydan Racecourse, Dubai on 28 March, 2020.

“Now he’s a much more mature horse, that’s why I think we are going to program Dubai instead of waiting two months between the Hong Kong Gold Cup and the QEII Cup, it’s too long to wait,”

The Archipenko gelding is on a bit of a comeback trail after failing last season to reach the level that saw him win the LONGINES Hong Kong Cup and Citi Hong Kong Gold Cup in the 2017/18 season. The chestnut has not won since he made all in last year’s Sa Sa Ladies’ Purse and that race will be his first-up target.

“Time Warp - we’ll see, last season he didn’t live up to his reputation and we’ll see how he goes this season. He’ll run on the third (November) as well and have the same programme - we have no choice he’s so highly rated,” Cruz said.

Cruz last season saddled 10 winners off a Conghua prep and he is hoping the relaxing environment will have helped Time Warp, who spent the off-season there prior to his return to Sha Tin at the end of September.

“It’s relaxed him, he’s very happy with Conghua, he likes it: every horse has liked it there. He’s a bit better in his mind and he’s a bit more quiet, as you can see, so let’s see how he performs now,” Cruz said.