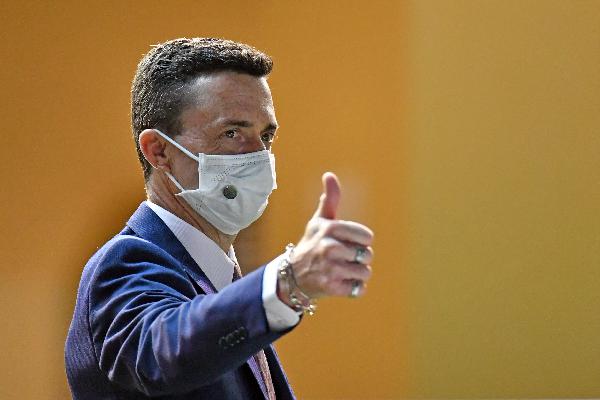 By Leo Schlink
Bidding to claim his third Group 1 spoil of the season, Douglas Whyte limbered up for Russian Emperor’s G1 Standard Chartered Champions & Chater Cup (2400m) tilt at Sha Tin on Sunday (22 May) with a double in tandem with Lyle Hewitson at Happy Valley on Wednesday night (18 May).

On a programme crowned by Keep You Warm’s stunning victory in the Class 2 Grass Island Handicap (1200m) for Lui and Zac Purton, Hewitson and Whyte posted their 14th win together this term with Valiant Elegance’s triumph in the first section of the Class 3 Kau Sai Chau Handicap (1200m).

The win was Hewitson’s 13th across the past eight meetings as Whyte praised his compatriot’s canny ride on Smiling Face, who scored his first win at his 30th attempt.

“He took the initiative to go back and take the rail and it shows what confidence can do,” Whyte said, “He rode a beautiful race, he eliminated a lot of problems and he made the winning move about 500 metres out by getting off the rail, he slid between horses and got the horse’s momentum up.”

The duo struck again with Valiant Elegance in the first section of the Class 3 Kau Sai Chau Handicap (1200m). Whyte is in the midst of his finest season since taking out his trainers’ licence, having struck twice at the elite level this campaign with Russian Emperor and Stronger.

Shinn emulated Hewitson’s feat by first combining with Francis Lui to snare the Class 4 Tiu Chung Chau Handicap (1650m) with Win Win Fighter, marking the son of Elzaam’s first success in Hong Kong to follow the two wins he posted when racing as Ecliptical in Ireland in 2020.

The Australian then combined with Caspar Fownes to notch his second double in as many meetings when Charming Speed narrowly prevailed in the second section of the Class 4 Ninepin Group Handicap (1200m).

“We drew a little bit awkward so I said to Blake ‘lets go forward and make our own luck’, I thought that would be an advantage to be in front of the main chances and it worked out,” Fownes said.

Badel also featured with a brace as Telecom Cheetah posted his second win of the season by clinching the Class 4 Tung Lung Chau Handicap (1800m) with a last-to-first effort for Dennis Yip.

The Frenchman quickly made it two for the evening when David Hall-trained Oversubscribed caused a 67/1 boilover in the first section of the Class 4 Ninepin Group Handicap (1200m).

“He’s had a lot of racing, he got a good ride by Alexis. He grabbed him at the start and he switched off, breathed beautifully and go into a rhythm and the pace helped the horse a hell of a lot,” Hall said.

“He sort of joined in without any effort and when he did have the sprint, it was enough to win the race and get the job done.”

The rollercoaster tussle for the trainers’ championship continued when Loyal Baby’s success in the Class 3 Ma Wan Handicap (1650m) allowed Frankie Lor to regain the lead from John Size.

Lor holds the narrowest of edges with 73 wins because, even though Size has the same number of victories, one of his wins was a dead-heat.

“He was very lucky, the late scratching of the horse (Atullibigeal) from barrier one meant we had the inside running from barrier two,” Man said. “The horse did a good job.”

Purton, who cut Joao Moreira’s margin in the jockey’s championship to three — 115-112 — was clearly taken with Keep You Warm’s blistering performance to win the final race of the night, downing Lucky With You and Explosive Witness to post his third win from 25 starts.

“He flew the gate, he made it very easy for himself,” Purton said. “When the speed came, he was in a really nice rhythm behind it and although it was a solid pace, he just seemed to be happy.

“When we came into the straight, he grabbed the bit like he wanted to have a crack — which was good — but then when I wanted to let him go, he exploded. It was a very good effort.”