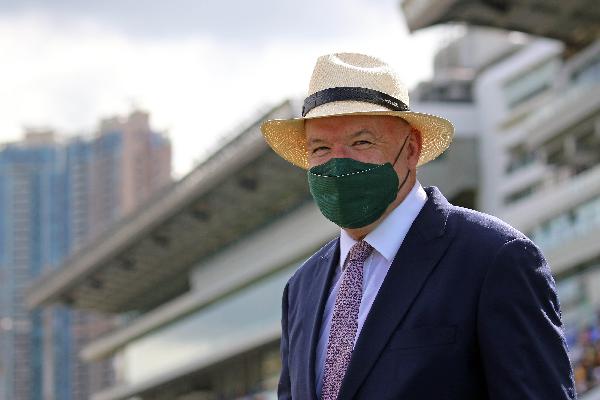 A four-time winner from eight runs for David Hayes, Lucky With You impressed last start with a smart win in Class 2, coming from off the speed to halt Cordyceps Six’s hat-trick bid, while earlier this season he’d already claimed a pair of tidy Class 3 successes.

Karis Teetan knows Lucky With You well and is looking for a fourth win aboard the 91-rater tomorrow night, stepping away from gate three against 11 opponents.

“He’s definitely a horse that’s going to improve with a high rating next season, so it’s going to be interesting.

“He’s going to Happy Valley for the first time which will be a test but I think it’s going to suit him and if the pace is on, he will have the finish that he gave us last time,” Teetan said.

Prior to last start, Lucky With You’s three wins came from out in front but his most recent effort showed versatility and that perhaps he is just as effective — or if not even more improved by coming from off the pace.

“He’s won most of his races by sitting in front, David Hayes was telling me recently that he can actually be a better horse by taking a sit and last time, changing the tactics, giving him the chance to sit where he was, I thought he had a better turn of foot.

“So again, he’s versatile and also he has the speed but leaving him where he is comfortable instead of forcing him to be up there is a better option,” Teetan said.

The quality of his latest win in April is highlighted by the opposition he bettered which included Cordyceps Six, Blaze Warrior, Trillion Win and Majestic Star — all of whom are Class 2 winners this season, while Duke Wai has one win in Class 1 on the dirt.

Campione arrived in Hong Kong from Italy where he was undefeated in three runs including a romping at G3 level in the Premio Primi Passi (1200m) for two-year-olds at Milan.

The Brazen Beau gelding is a two-time winner in Hong Kong from three starts, scoring on the turf and dirt at Sha Tin, both times over 1200m.

Teetan is in for a busy evening at Happy Valley with eight rides in total, including Packing Award in the Class 3 Ma Wan Handicap (1650m) as well as Scotch Tycoon in the first section of the Class 3 Kau Sai Chau Handicap (1200m).

This Sunday’s (22 May) 11-race fixture at Sha Tin features the G1 Standard Chartered Champions & Chater Cup (2400m) which Teetan is chasing a repeat in aboard Panfield after the bay’s decisive kick delivered victory in 2021 for the Mauritian and trainer Tony Millard.

“I felt in the trial that he is coming back to himself, so it just gives me a bit of confidence heading to the race,” the 31-year-old said.

Following his first-up win this term, Panfield failed to find a placing until his fast-closing effort for third last start in the G1 FWD QEII Cup (2000m) behind Romantic Warrior.

Teetan currently sits in outright third spot in the 2021/22 jockeys’ championship with 64 wins and HK$126.94 million in stakes for connections.

“To win a few major races this season was great but you can’t do that without the support that I am getting, so of course to win a Group 1 towards the final part of the season would be good, it just gives you the confidence to really look forward to next season already, so it’s been a great season and if I can win this race again it would be fantastic,” Teetan said.