Fast plan comes off for a Chevalier Cup win 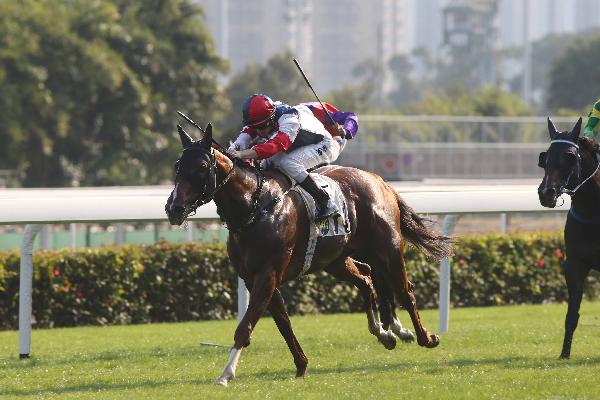 A good plan is nothing without smart execution and Zac Purton and Fast Most Furious delivered the latter for David Hall in the Class 1 Chevalier Cup Handicap (1600m) at Sha Tin this afternoon, Saturday, 23 November.

Hall had set a twin target for the Lope De Vega gelding. The first bite of the cherry had failed to satisfy, with Fast Most Furious running on for third in the Class 1 Panasonic Cup Handicap (1400m) two weeks ago: the second bite was sweet.

“It was these two races for the month,” Hall said. “These are the two races I set him for at the start of the year. I knew the handicap would be in his favour a little bit and the distances were probably perfect.

“It was a bit disappointing he didn't win the first one, probably due to the fact there was a hot bias to the front-runners and he had to do a pretty big job to get where he did at the finish. He was on track, he was on form: I think it was a very well-deserved win. He’s been running amazingly consistently for a long time now.”

Encouraging (133lb) made all for victory in the Panasonic Cup but this time the John Moore-trained galloper had to cede the lead to the trail-blazing Mission Tycoon (112lb). The leaders couldn't hold on though: Purton had his mount towards the rear and maintained an inside route in the home straight, quickening through the final 300m to score by a length and a half.&nbsp;

“We discussed it before the race,” Hall said. “He’d won from the inside at Happy Valley through a needle-eye opening. They fanned and spread out and he’s got a pretty good jockey on his back, so (Zac) wasn’t going to go outside, I don't think!”

Runner-up Harmony Victory (125lb) and third-placed Extra Brut (117lb) delivered their challenges wide down the centre of the track, while Purton slipped along the easier alley.

“It’s a well-deserved win,” the champion jockey said. “I think it gets tough for him now, he was set for that race today; he’s been consistent all season and he deserved another victory.

“Things panned out well for him with the light weight but he’s at the top of the summit now so he’s going to need to find something if he’s going to keep going.”

The win was Fast Most Furious’ fourth at his 22nd start in Hong Kong and Hall, having seen his plan come together, was unsure about what might be next for the chestnut, rated 96 for this assignment.

“I’ll have to have a sit down and think about where we go and how the rating is and what works for him,” he said. “He won the last race of last season and he’s out up-and-running early, and has delivered the goods: at some point he’ll probably have a little let-up and freshen up but I’ll give it a bit more thought now.

“I think 1400 to 1600 metres is probably his game but we’ll be dictated to by the programme. We’ve only really come as far as these two races this month, they were the two goals at this stage, so it’s good to pull it off.”

Champion’s Way (132lb) started the campaign as the top-rated of his peers heading towards this season’s Four-Year-Old Classic Series. John Size’s galloper was only ninth in the Panasonic Cup and while the bay showed up closer in seventh today, he appeared to roll around in the straight, shifting off his line when the pressure was on after plugging along a wide path.

“I’ll have to look at the replay but my initial thought is it’s a little bit disappointing,” jockey Regan Bayliss said.

Keith Yeung, on the other hand, was rightly pleased with G1 Victoria Derby (2500m) winner Extra Brut, making his Hong Kong debut for trainer Frankie Lor and another heading towards the Classic Series, which kicks off with the Hong Kong Classic Mile on 27 January.&nbsp;

“He’s still not fit but he feels like a really nice horse,” Yeung said. “At the 600 (metres) mark, when they started to kick up he couldn’t follow the pace, so I just looked after him to let him do everything right and get into his rhythm - then he changed legs and finished off really well.”

Lucky More was value for a good deal more than the four and a quarter-length winning margin in the Class 4 Chevalier Construction Handicap (1000m), his second career start. Purton barely twitched on the three-year-old for a sauntering win in 56.01s.

That made up for a narrow debut defeat by Duke Wai three weeks ago when the Australian colt was turned over at odds of 1.5 — he returned the 1.8 favourite for today’s score.

“Last time he didn’t know what was happening, he was too aggressive but he learned a lot from that race. He’s a good horse,” trainer Danny Shum said.

Shinn is starting to find his Hong Kong groove after almost three months on the circuit. The Australian ace dead-heated the last at Happy Valley on Wednesday night and kept his momentum rolling in bagging the afternoon’s opener, taking his season’s tally to five.

Alexis Badel shared the Valley finale with Shinn and the Frenchman wasted little time getting the third win of his winter stint on the board, driving Adonis to success in race two, the Class 5 Chevalier Car Dealership Handicap (1400m). That was the jockey’s second ride for first-season trainer Douglas Whyte who took his stable’s tally to a healthy nine.

Ricky Yiu’s blistering start to the season continued with a second treble in as many meetings. The premiership leader’s Villa Fionn shifted wide on the track and rattled home from deep to win the Class 4 Chevalier E &amp; M Engineering Handicap (1600m) under Matthew Chadwick.

Ho and Francis Lui make a fairly formidable team nowadays. The jockey and trainer combined for their eighth win together this season when the talented Golden Sixty took his haul to six wins from seventh starts with another impressive success.

The probable Four-Year-Old Classic Series contender was a length and a quarter too good for his 13 rivals despite shouldering top-weight in the Class 2 Chevalier Property Investment Handicap (1400m).

“He carried 133lb so it wasn’t as easy as before, he felt it today, but he ran a good time and he was relaxed enough, he didn’t use much early and I’m happy the way he raced,” Ho said.

“He definitely feels like a Classic Mile horse and we’re aiming that way.”

Lui is considering running his gelding next in a Class 2 over the course and distance on 15 December.

“He has an option over 1400m here next month and that’s the only option at the distance on the grass, then we’d look to the Classic Mile,” he said.

Ho and Lui bagged an earlier victory when Elite Patch drew clear for an easy four-length win in the Class 3 Chevalier Environmental Engineering Handicap (1200m) on the dirt.

Aquila was another smart winner on the dirt. Jimmy Ting’s charge took the Class 3 Chevalier Lifts &amp; Escalators Handicap (1200m) by two and a quarter lengths under Chad Schofield.