Freshness pays off as Dragon swoops to take the trophy 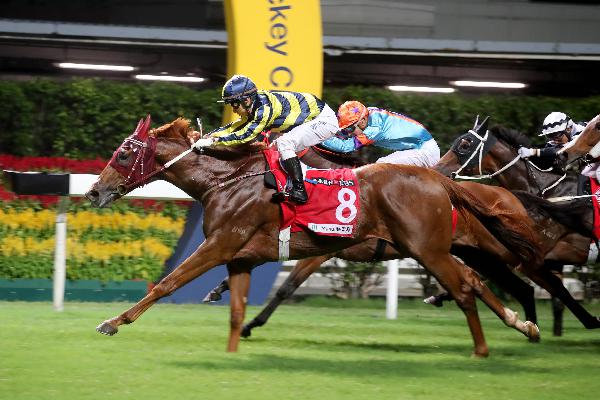 Trainer John Moore credited a relaxing summer break for the five-year-old being able to snare the feature at his first start this term.

“Catch him fresh – that seems to be the trick!” the handler said. “He was over the top when he ran badly in his final race of last season but he’s another horse who really benefited from a summer in Conghua.”

Happy Dragon was one of six winners on the nine-race card trained at Conghua since their last start, the others being Flame Lily, Aurora Pegasus, Flash Famous, All Wongchoy and Snap Fit, while a seventh, Starlot, summered at the Jockey Club’s Mainland facility.

“That was a nice surprise but when I saw the board I definitely didn’t see 28/1 as being an accurate price. He was 30lb overweight but you wouldn’t hold that against him to look at him, he looks well and he’s shown it there.”

Matthew Chadwick guided Happy Dragon (119lb) to a half-length verdict over Dances With Dragon (120lb) but his mount proved to be a handful in the early stages. That changed when Karis Teetan kicked Playa Del Puente (118lb) to the lead in the back straight and upped the tempo.

“When they put that pace on it helped me a lot,” Chadwick said. “I was fighting with him for the first half of the race and once the pace went on he relaxed nicely. And when they all went walkabout on the turn, it gave him a lovely run through. He was fresh, so he quickened nicely and he had just enough finish to hold on.”

Moore gave a shout out to two of his work riders who have done a lot of work with the headstrong chestnut, a 1400m winner at Naas, Ireland, pre-import.

“Congratulations to the two boys who ride him, Jan and Romain,” Moore said. “He’s a very difficult horse to ride, you’ll see him doing 21 and 22 seconds in the morning, he’s hard on the steel, he’s not tractable. But, tonight, you could see in his demeanour, we’ve got his temperament right. There’s definitely another win in him.”

Neil Callan might have been cursing but Keith Yeung was definitely smiling when Hardly Swears (128lb) swept wide through a closing split of 22.76s to mug Travel Datuk (122lb) in section three of the Class 4 Nakayama Handicap (1200m).

Travel Datuk was the 3.2 favourite and Callan guided the 34-race maiden to what on another night might have been a much-needed win. But the Irishman was left on zero for the term so far, while Yeung took his Hong Kong career tally to 250.

Yeung’s landmark means he loses his 2lb ‘local rider’ allowance: from now on, he will compete on level terms with his expatriate rivals. Meanwhile, the Jimmy Ting-trained Hardly Swears will find himself in Class 3 next time after making it two wins on the bounce, tonight’s race being his first at six furlongs.

“I said this horse would be better at 1200 metres than the 1000,” Ting said. “Even though he won over 1000 last time, the pace was a bit fast, which meant it was more suitable for him and he was able to come from behind and win. This time, the distance was much more suitable.

“At this stage I will keep him at Happy Valley; in the morning he gets nervous and so he’s much more calm when he comes here. Maybe after one or two more races we’ll go to Sha Tin with him and in time I think 1400 metres will be best for him.

“When he first came to Hong Kong he was awful and I thought it would be difficult for him to win but by the end of last season he had improved a lot, and after the summer break, he was much better, so I think he can keep improving and win in Class 3.”

Ting claimed a brace thanks to Ballistic King in the Class 3 Tokyo Handicap (1200m). The Commands five-year-old charged down the outside to score by three quarters of a length under Aldo Domeyer.

Purton snaps to a treble

The hard-fought victory sealed a hat-trick for the unbeaten Caspar Fownes-trained five-year-old.

“They went really hard through the mid-section and he was struggling to keep up but he came through like he was going to win it easily and he hit a flat spot,” Purton said.

“It wasn’t until he heard the other runner coming next to him that he just kept sticking his neck out. He’s obviously got a bit of ticker – he might be suited over a little bit further.”

Purton kicked off the card with a success on Starlot in the Class 5 Niigata Handicap (1200m). That win ensured trainer Paul O’Sullivan continued his hot streak, the New Zealander having landed a treble at Sha Tin on Sunday.

The handler, who now has six wins on the board, has credited the Jockey Club’s Conghua facility for what, compared to past seasons, is a flying start to the campaign. Starlot is another to have benefited: the six-year-old spent the summer there and returned to Sha Tin ahead of his previous start back in September.

Purton was on the mark again in race four, section two of the Class 4 Nakayama Handicap (1200m). The champion jockey urged another short-priced favourite (1.8) from the Fownes yard, Aurora Pegasus (124lb), to a half-length win over The Abraxas (116lb).

“It’s about time a few horses started hitting the line. I’ve had a few frustrating placings so I’m due for the wheel to spin my way a little bit, it’ll even itself out,” Purton said of his night’s work.

Joao Moreira rode a smart race to win section one of the Class 4 Hanshin Handicap (1650m) on the Frankie Lor-trained Flame Lily, a 17-race maiden before this evening.

“Joao Moreira was the key: the horse is one-paced and he needs a good jockey,” Lor said. “The idea was to lead if he could but he was crossed by some quicker horses from the outside and Joao took the clever decision to sit and that meant he was able to finish off strongly.”

Lor made it two on the night when the Chad Schofield-ridden Flash Famous landed section two of the Class 4 Hanshin Handicap (1650m).

Blake Shinn had to work hard to claim his second Hong Kong win but the rider’s redoubtable drive paid off as All Wongchoy (126lb) edged the Yeung-ridden Precious Sweetie (130lb) in a battling finish to section one of the Class 4 Nakayama Handicap (1200m). The Danny Shum-trained winner was scoring at his second career start.