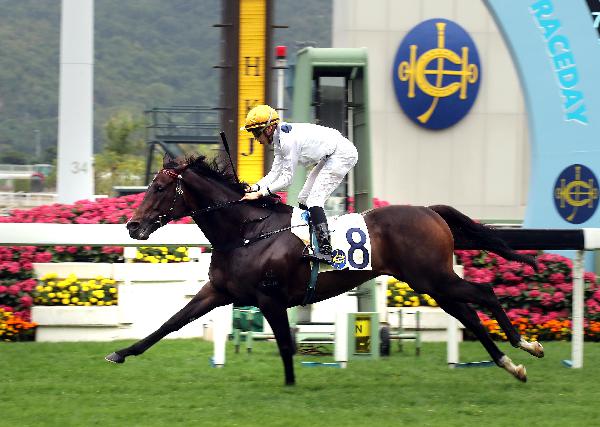 Golden Sixty made a big statement with an impressive win in the G3 Chinese Club Challenge Cup Handicap (1400m) at Sha Tin this afternoon (Wednesday, 1 January).

The exciting rising star dominated the New Year’s Day feature to cement his status as a chief protagonist for this season’s three-race Four-Year-old Classic Series. The first test, the Hong Kong Classic Mile, is less than four weeks away.

“The mile will definitely be in his scope, he’s ready,” jockey Vincent Ho said after his mount drew two lengths clear of seven smart rivals to take the spoils in a time of 1m 20.70s.

“He travelled beautifully, he wasn’t pulling – he was genuine. When I pulled him out he showed a great turn-of-foot and won easily. He tries extremely hard, it’s been a case of getting his mind right; he’s still a bit hot, a bit toey, but he’s more relaxed in his races now.”

Golden Sixty (116lb) not only took his career haul to seven wins from eight starts – all at 1200m and 1400m – but also became the first horse in Hong Kong to win four races this term.

Trainer Francis Lui has two of the top candidates for Hong Kong Classic Mile glory with Golden Sixty’s stablemate More Than This unbeaten in three runs this campaign.

Lui did not rule out a BMW Hong Kong Derby (2000m) tilt in March for Golden Sixty either, although he was more reserved on that front.

“I’ll have to see how he goes in the Classic Mile. The four-year-olds aim to the Derby but I have to look at the Classic Mile first,” he said of his Medaglia D’Oro gelding.

“Last run he was already relaxed so I think he can handle the mile no problem. I just need the horse relaxed, you can see in his trackwork he already just wants to go but now, in his races, you can see he’s relaxing very well.

“I’m happy to see him run like that. Every time he runs he has a very good fighting heart, he tries his best.”

The latter, already a G3 winner and rated 108 at the end of last term, improved on two below-par efforts this season with a solid third, conceding 4lb to the winner.

Tony Piccone has only been in Hong Kong three days but he hit the ground running with a win and two third-place returns from four rides.

“It’s very important for me, my first day in Hong Kong, to ride a winner. I’m very happy and I hope to continue,” the Frenchman said.

His victory came in the afternoon’s finale, the Class 3 Flame Tree Handicap (1600m), aboard the Danny Shum-trained Charity Go.

“My trainer told me to wait and finish, if possible, outside. My horse was very easy in the middle and when I went between horses, he was very happy and was very easy at the finish,” Piccone said.

The G1-winning jockey had said beforehand that he would ride with confidence and he was true to his word from the outset.&nbsp;

“I’d never ridden here, I don't know the jockeys and the horses, but I was confident,” he said. “The trainers have been very sympathetic to me, so today it was easy for me. I had good rides and it’s easy with a good horse.

Voyage Warrior drew comparisons with one of trainer Ricky Yiu’s past G1-winning speedsters after blazing away from his rivals in the Class 2 Cherry Handicap down the 1000m straight.

“He’s a bullet,” jockey Joao Moreira told the trainer as he returned to unsaddle.

Shortly afterwards, the Brazilian said: “Ricky mentioned to me before the race that he’s got a little bit of Amber Sky in him and he’s probably right, he’s so speedy.”

The four-year-old bounced back from a pair of disappointing defeats to score by an easy three lengths.

“Fortunately, he seems a bit more mature and reliable this time. I was able to manage his energy and he was able to show me what he’s got at the end. He’s a good horse with a bright future,” Moreira added.

“I said to Joao, ‘just remember Amber Sky and use his gate speed’. When he came back I asked him what percentage he would give him compared to Amber Sky and he said 90%. The other 10% will come over 1200 metres,” Yiu said.&nbsp;

“Amber Sky was 1000 (metres) but I hope Voyage Warrior can cope with 1200 because I want to try him in a big international event.

“He’s been to Conghua – a lot of my horses like going there – we took the cross noseband off, he put on a bit of weight and in general he’s even more relaxed. The change of environment at Conghua has changed him a bit.”

Lucky More is another exciting young talent on the up. The Danny Shum-trained three-year-old colt carried champion jockey Zac Purton to a smooth one-length triumph in section two of the Class 3 Chinese Banyan Handicap (1200m).

Purton earlier teamed up with trainer Frankie Lor for victory in the Class 4 Poplar Handicap (1400m). Joyful Heart (123lb) was all out at the line to hold the late-flying Circuit Three (128lb).

Douglas Whyte’s rich vein of form straddled the turn-of-the-year. The first-season handler snared the last race of 2019 with Last Kingdom and took the first race in 2020 when Iron Boy dug deep to take the Class 4 Palm Handicap (1400m) by a neck under Karis Teetan.

“You wouldn't have dreamed for a better start than that. I’ve got a great team behind me; every ship needs a captain and it needs a crew as well – they hold the ship together,” he said.

Whyte made it a double when Super Wealthy opened his account in section one of the Class 3 Chinese Banyan Handicap (1200m) at his second start, and in some style.

“When you work him in the morning, he gives you a real classy feel, he covers ground without you even knowing it and you're running times: you try and run 25 or 26 (seconds) and you’re running 24s and he’s got his ears pricked. Those sorts of horses have always got a bit of class up their sleeve, but look, he’s only a two-time starter and I’m going to have a bit of fun with him,” the handler said.

Whyte believes the four-year-old will get 1400 metres “and possibly a mile later on” but is happy to stick to 1200m for now as he continues his education. The gelding arrived in Hong Kong with a maiden win from his only start in Australia and made a good impression first-up at Sha Tin when second to the talented Beauty Applause.

“He was very intractable in his first race here in Hong Kong and I thought it was a very good effort because first-timers don't overcome that and still hit the line,” Whyte said.

“What I’ve had to get instilled in him is that it’s okay to sit behind and not charge – when he hears a noise behind him he thinks he has to go. He’s been a work in progress to just take the chill pill and get some confidence and he’s learning pretty well.”

Jack Wong punched the air as he delivered a 146/1 jolt in the Class 5 Yew Handicap (1800m). The rider snared his third of the season and first since 27 October when the David Hall-trained Mcmunigal – runner-up in the G3 Killavullan Stakes in Ireland pre-import – found his feet at the 15th time of asking in Hong Kong, off a career-low rating of 31.

The Lor stable sealed a double when apprentice Alfred Chan got the better of a blanket finish aboard 40/1 longshot Looking Good in the Class 3 Cotton Tree Handicap (1400m).

Neil Callan gave the Paul O’Sullivan-trained Starship a power-packed ride to win the Class 4 Willow Handicap (1600m), taking the Irishman’s tally for the term to seven.&nbsp;