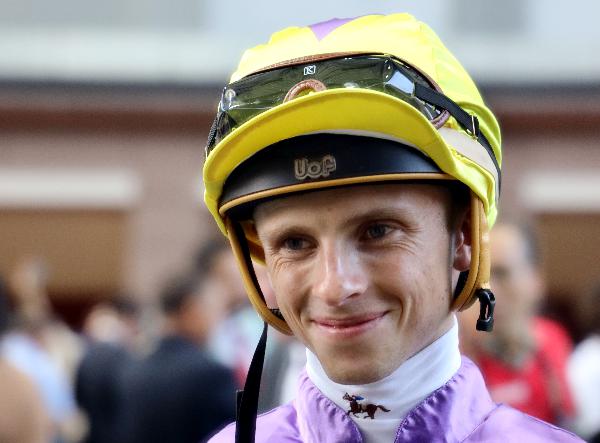 Lyle Hewitson is discovering first-hand that Hong Kong racing’s reputation as an ultra-competitive crucible is not just empty spin.

Six weeks into his first season, the two-time South African champion is winless after 44 rides, spanning only seven of the campaign’s 10 meetings so far thanks to an untimely early suspension. But the young rider, 21, heads into Happy Valley’s midweek fixture (Wednesday, 16 October) upbeat and confident that his ability and work ethic will win through.

“It is tough here,” he said. “The setback was the two weeks off, which was a kick in the teeth, but I’ve been working hard and been pretty optimistic and I remain hard-working and happy so I’m sure I’ll crack the ice soon.

“It’s always difficult, people start to doubt you a little bit but it’s all about remaining positive: have that optimism and get the ball rolling.”

Hewiston is hoping to start that roll in the night’s opener, the Class 5 Kam Shan Handicap (1800m), aboard Money Marshal (119lb) for the in-form Paul O’Sullivan stable.

The rider was in the plate for the 16-race maiden’s first two runs this season, the last of those being a solid second to Curling Luxury over the distance at Sha Tin 10 days ago. That followed a fair eighth over 1400m.

“He was luckless first time out and probably just a touch short so would have needed it, but he showed the improvement and came on nicely over the 1800 (metres). He hasn't shown much at Happy Valley thus far but this is his right sort of trip so hopefully there’ll be some improvement in that regard.”

Hewitson’s mount is not the most straightforward but he takes confidence from the fact that Money Marshal is showing good form.

“He’s a bit of a difficult ride, he can run around and he hangs but he’s third up after a good run and I’m expecting him to run a positive race again,” he said.

“I think he wants 1800 metres and he enjoys a good tempo too. It depends how the race unfolds but I don’t think he’s a one-dimensional horse either, we might have a few options but it is Class 5 and he’s in form at the moment so hopefully he can back that up.”

Hewitson, despite his blank, had nine rides at Sha Tin last Saturday and has seven on Wednesday’s eight-race card.

Hewitson is one of six riders on the Hong Kong roster hungry for their first win of the term. Another is Umberto Rispoli who narrowly failed to bag a victory when closing to a short head second aboard Golden Four at Sha Tin on Saturday.

The Italian has only two rides at the Valley but reunites with the David Ferraris-trained Sangria in the Class 4 Shek Pik Handicap (1800m). Rispoli showed plenty of gumption and nerve when guiding the six-year-old to a runner-up finish at the course and distance last month.

“I nearly got there but unfortunately we found a horse who was probably more ready than us,” he said.

“The horse ran pretty good actually. He’s not a horse with a turn-of-foot and the pace went slow, that’s why I decided on the backstretch to let him enjoy the run and he responded pretty well, but in the straight we just got beat.

“He’s the kind of horse that is suited by a very fast pace. If the pace is slow, there’s no point staying at the back because once you get to the bend they're going to push you six or seven wide around - he will never win a  race like that.

“He needs six or seven hundred metres to wind up his action and once he’s hot you have to ride him from there but he’s not fast enough to go at the head of the pace,” he added.

Universal Go Go proved to be an admirably consistent galloper last term, winning two races under Vincent Ho and bagging five minor placings too. The Francis Lui-trained five-year-old steps out for the first time this term in the Class 3 High Island Handicap (1650m).

Ho, who sits on five wins for the season, was in the plate for a recent barrier trial and has also done plenty of fast work aboard his reliable ally.

“He felt ok, quite fit,” the rider said. “He trialled ok but he sort of stumbled out the gate so I let him find his rhythm first and then at the last bit I asked him and he still stretched out nice. He’s been galloping quite nicely as well, together with some horses, and he seems good.

“He’s fit but the draw is difficult, draw 10,” he continued. “But he’s quite fast out the gate so hopefully he can still get a good position. He got beat by good horses in Class 3 so I don't doubt his ability. At this rating (64) he’s still good.”

The night’s trophy race is the Class 3 American Club Challenge Cup Handicap (1800m) in which the Tony Millard-trained Giant Turtle (130lb) tops the weights; Joao Moreira, backing up off a five-timer at the weekend, rides the Ferraris-trained Xiang Bai Qi (126lb) and Zac Purton is set to partner the John Moore-trained Tashidelek (129lb).