Hong Kong raiders have barriers to overcome in Korea 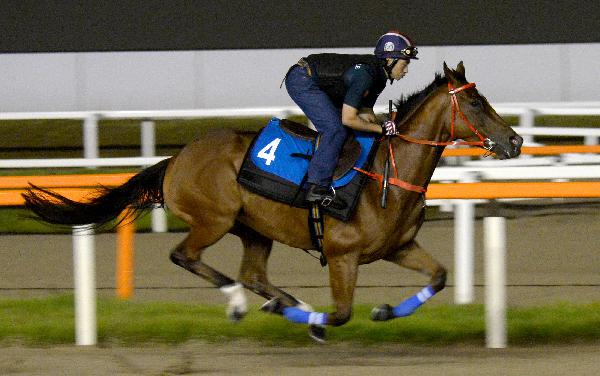 Frankie Lor’s options had gone when he dipped his hand to select a red ball from a box at this afternoon’s (Thursday, 5 September) barrier draw for the KOR G1 Korea Cup, there was only one ball left. Glorious Artist will break from gate one.

That puts the Hong Kong raider right up against the rail for Sunday’s (8 September) 1800m sand track test.

“I wanted to draw three or four but I had no choice. Lucky last!” the rueful trainer said.

A short time earlier, Me Tsui had looked on as Pat Ching, manager for the Just Fantastic Syndicate, pulled the 12 ball for Ugly Warrior in the KOR G1 Korea Sprint (1200m). That was several berth’s wider than the handler was hoping for, but then again, his Fight Hero was beaten only a whisker by Moanin in last year’s edition after racing wide from gate 13.

“It’s still better than drawing one, two or three,” Tsui said. “Being outside means he won’t feel the pressure from other horses and that’s good because he doesn’t like it when horses press him on his outside.

“If you watch his races, when he breaks and when horses come up fast outside, he worries a little bit. He’ll have plenty of room and space from 12 to cross in.”

Tsui has past experience of travelling horses here and to Dubai. Lor, though, is experiencing it all for the first time. John Size’s former assistant is in his third season as a licensed trainer, having excelled as a rookie and then followed up with a string of big race wins last term that included G1 triumphs with Mr Stunning and Glorious Forever, and a clean sweep of the Four-Year-Old Classic Series, topped off by Furore’s BMW Hong Kong Derby win.

“I never travelled overseas with Mr Size’s horses,” he said. “When I was Assistant Trainer I stayed in Hong Kong and the trainer went there, so this is my first time.

“Me and my team need to learn how to send horses overseas and learn about the preparation,” he continued. “I think after this time it will be much better. But I’m happy with how things have gone this time, my work rider, my head lad Kelvin Wan, he has a lot of experience from when he worked for John Moore, he’s travelled horses to Dubai and Singapore.”

Glorious Artist is having his first trip abroad too. The five-year-old will have to be at the top his game to see off 10 rivals in a field that features local hero Dolkong (gate 10) and a US contingent that includes G2 Holy Bull Stakes winner Harvey Wallbanger (2) and G1-placed Lone Sailor (3).

Lor is hopeful that gate one will not be a hindrance to his three-time Sha Tin dirt track winner, but any fulfilment of that hope will be reliant on a dose of racing luck.

“It’s his first time on this track so it would be better if something else could jump in front and lead him. I don’t want him to lead if we can help it,” he said. “It would be ideal if he could just move out a little bit, so he’s not on the fence, because the kickback here is harder than Hong Kong.”

Glorious Artist galloped down the Seoul straight shortly after 5am and Lor was satisfied with the effort.

“I’m happy, he’s come back looking fine after his work this morning and everything is good. Today was the last gallop and the work rider said that the form is good and he looks happy. When he arrived, he dropped almost 20 pounds but now his weight has gone up again,” he said.

“We don’t know what the track will be like, it could be wet, so we’ll have to see.”

Tsui, meanwhile, was pleased with Ugly Warrior’s demeanour this morning. The light-framed chestnut was kept to little more than a steady trot on the main track.

“He took it easy, very comfortable, because he galloped on Wednesday. I want him to feel comfortable. He’s eating and his body looks good,” Tsui said of the Swiss Ace gelding who weighed in at 1003lb for his latest win back in June.

“He’s very relaxed in the morning. He’ll have a slow canter the next couple of days and then the last day he’ll just walk around by the stable.”

Ugly Warrior is a proven dirt track specialist at Sha Tin with six wins from nine starts on that surface. Seoul’s sand will be a different proposition, however, and the five-year-old will also have to contend with unknown rivals.

The home camp has no shortage of confidence in Gaon Champ (6) and the front-running Blue Chipper (13), while a team of three US raiders features the former Uruguayan champion sprint mare Holy Legal (5), Listed winner Heartwood (7) and G3-placed Fast Pass (3).  to ride Hong Kong’s representatives Glorious Artist and ugly Warrior at the Korea Autumn Racing Carnival.

“He’s the easiest colt I’ve ever ridden, he’s quiet and honest,” winning jockey Keith Yeung said. “I think he still has plenty of improvement. He hasn't tightened up yet, he’s a bit fat, to me, and he’ll grow more solid. He has a bright future.”

Ho and Lui made it a double together in the finale, the Class 3 Li Fa Shan Handicap (1400m), thanks to Cordyceps.

Gold Chest arrived from Britain last term with a sizeable reputation. The well-bred War Front gelding, known as Naval Intelligence pre-import, was unable to measure up to expectations when down the field in both the BMW Hong Kong Derby and Hong Kong Classic Cup.

But trainer Richard Gibson has been based at Sha Tin long enough to know that a failed four-year-old classic campaign can still be the springboard to a successful Hong Kong career. The bay finally broke his local duck at his eighth start in the Class 2 Tai Mo Shan Handicap (1400m) and he did it in some style under Derek Leung.

“It was a cool ride from Derek and we’ve got an exciting horse to work with this year,” Gibson said.

“You can’t hide my disappointment from last season: of course we expected better from the horse, but like many horses from Europe, with one preparation under their belt they improve the next year.

“It was a comfortable win today, I think the horse will increase in distance and I think he will continue to improve.”

Aldo Domeyer showed a sharp pair of heels to his fellow jockeys when winning the annual jockeys’ sprint relay race at last Saturday’s Pre-season Carnival, and he made a fast start to his season with a double this afternoon.

The South African rode a fairly impressive 13 wins during a late-season contract and continued that momentum with a race-to-race brace for trainer Tony Cruz. California Gungho’s win in the Class 4 Ma On Shan Handicap (1200m) was straightforward but Domeyer had to survive an objection before Sunshine Warrior’s win was confirmed in the Class 4 Kowloon Peak Handicap (1400m).

“The jockey made a mistake in the last 100 metres, he put his head down and the horse drifted, but he was going on too strongly anyway,” Cruz said. “He will see his mistake and he’ll improve on it, I’m sure of that – I’m sure he can be successful here.”

“My horses are in good form, they’re fit and forward, I’m happy with them,” Cruz added.