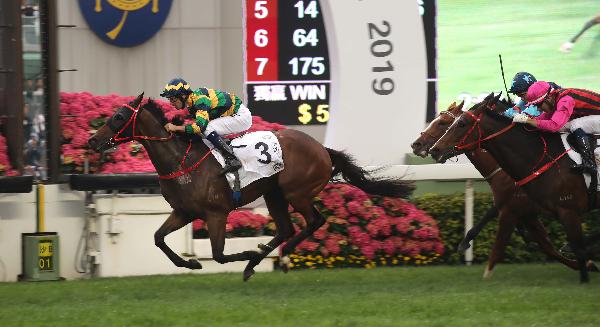 “We won the Derby together and I think he is a really good jockey. I will try to give him some rides — he’s a heavy jockey,” Lor said, referring to Bowman.

Lor and Bowman won the 2019 BMW Hong Kong Derby in tandem with Furore, as well as the 2019 Hong Kong Classic Mile (1600m) with that same horse. Bowman has arrived in Hong Kong to kick off a short-term stint this Sunday after initially being ruled out of Wednesday’s (16 November) fixture at Happy Valley.

Money Catcher won his first race in Hong Kong in the G3 Sa Sa Ladies’ Purse Handicap (1800m) at Sha Tin earlier this month for Lor after snapping an exasperating run of outs, leading from the get-go to win by half a length.

“Finally he won a race, we waited a long time. He’s consistent but he couldn’t win, now he’s won, he should be better,” Lor said.

“Stepping up in distance is no problem — 2000 metres is the maximum. He’s a little bit one-paced, so he needs to lead, sit second or third in the run,” Lor said.

Money Catcher placed second twice at Group 2 level in New Zealand prior to export over 1600m and 2100m. Lor expects his charge to feature in December’s G1 LONGINES Hong Kong Cup (2000m) after Sunday’s contest — should he pass the test.

“If Money Catcher runs well he will go to the Hong Kong Cup, even if he finishes close,” Lor said.

“He always improves just a little bit, always a little — never a lot. He looks better than last start and with a good draw we can sit a bit closer. I hope he can continue to improve this season,” Lor said.

Master Eight is a five-time winner from 11 starts with his biggest scalp coming in the 2021 G3 Bauhinia Sprint Trophy Handicap (1000m) at Sha Tin.