Plenty to Admire for Soumillon in poignant Hong Kong Mile 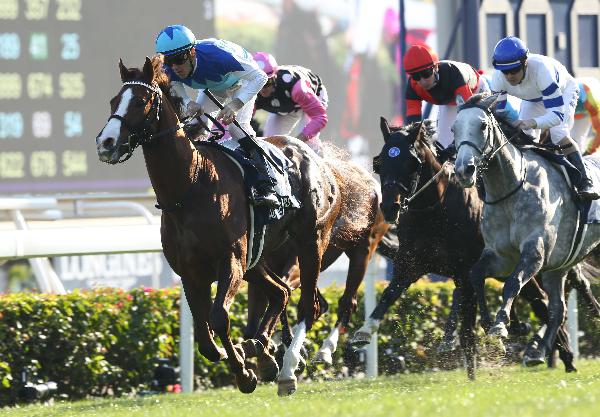 Admire Mars and an inspired Christophe Soumillon came to the fore in what was an emotional occasion for the Japanese racing industry in the G1 LONGINES Hong Kong Mile (1600m) at Sha Tin today (Sunday, 8 December).

It was not, perhaps, the result that the home town audience yearned for, with the hat-trick seeking Beauty Generation looking as if he would defy his advancing years when cruising into the lead at the 400-metre mark.

Unfortunately for the massed supporters of John Moore’s hugely popular performer, the tank began to empty almost as soon as Zac Purton began to ask Beauty Generation for one final ounce of effort, while a surging pair of rivals were making alarming progress.

Admire Mars, under sustained pressure from his Belgian-born pilot down the home straight, poked his chestnut head in front with only 100 metres remaining and passed the line half a length clear of the advancing Waikuku and Joao Moreira.

The winner carries the recognisable blue and white silks of Riichi Kondo, one of Japan’s most significant owners, who died only a few weeks ago. His widow attended the presentation ceremony, although the horse was still registered under her late husband’s name, and trainer Yasuo Tomomichi, who was wearing the livery of the owner in his suit and tie, was also holding back the tears.

Soumillon said: “He was probably one of the biggest private owners in the Japanese racing industry, he was somebody very famous who loved horses.

“We could see his colours from a long time ago, they won nearly everywhere. We had the bad news a few weeks ago so I’m really proud and happy to take these colours so high today.”

It is actually 11 years since Soumillon’s last victory at this meeting, which also came in the Mile aboard Good Ba Ba. This European winter, however, he has moved his talents to Japan. It was the first time he had partnered Admire Mars, a two-time G1 scorer and winner of five from eight career starts who had seemingly been aimed towards Sha Tin for some time.

“I knew my horse was very strong, although his last run wasn’t that good,” he said. “He was the best two-year-old last year in Japan, probably the best three-year-old in Japan too.

“I knew he could stay that distance quite well, he has good gate speed, he liked the ground, so I was quite happy. I told the lad before the race when I saw the odds on the screen 'there’s something wrong there because for me he should be in the first four favourites'. I rode my race as if he was the favourite and it paid off.”

With the field carried along steadily for the most part by Ka Ying Star and then Beauty Generation, Soumillon always had something to aim at from his position in midfield.

“The first time I saw Beauty Generation running this year, and last time also, I saw he didn’t have the magic he had last year, so that gave me a chance to think that he was beatable,” he revealed.

“For a few strides I thought Zac would go and then at the 300 metres mark I thought ‘I will grab him’. I felt Joao coming on the outside and he’s flying so much at the moment, I thought it would be hard to push my horse into the line but he did it really well.”

Tomomichi has shown adventure in campaigning horses overseas already, taking the likes of the 2017 Dubai Turf with Vivlos and running Cheval Grand at York and Ascot a few months ago.

“I did think this was going to be a difficult race for a three-year-old to win, but when I saw how he had settled here earlier this week, I thought that he looked really well,” he said.

“Christophe Soumillon had asked to ride the horse, and he gave him a very good ride.”

He continued: “We were all going to wear the same suit and tie together, so it still feels as if Mr Kondo is with us watching the race. He was a big supporter for me for a long time, he had many good horses, and he was a very good person.”

Trainer John Moore had maintained that Beauty Generation, the two-time Hong Kong Horse of the Year, was starting to show a little more sparkle in exercise despite defeats when conceding weight in lead-up races in the Sha Tin Trophy and Jockey Club Mile.

“He was gallant in defeat,” said Moore. “In his last two runs he hasn't been hitting the line as we'd expect. That's what Zac said and he confirmed that.

“He's just not going through the gears when he gets into the straight and he did it again today. The Stewards’ Cup will be his next Group 1 race and we'll take it race by race from there.”

There were no hard feelings from Moreira, who had another afternoon to cherish at the circuit. Having beaten Beauty Generation in the Jockey Club Mile, Waikuku confirmed places here from the widest gate 10.

“It was an extremely good run, he had to face a tough gate and I had to drag him back,” said the rider.

“He wasn’t having much luck from there but he’s a good second to a good horse. We didn't have too much luck from the gate and I think that is what has got him beaten. That's the reason why I pulled him back otherwise I was going to get tracked wide.”

At a ‘Turf World Championships’ that belonged to Japan, the last word should go to Soumillon.

“They are training horses on tough tracks, they are feeding them really well, trying many kinds of things and it pays off. They won the Melbourne Cup, Hong Kong, Dubai, nearly everywhere. It’s a great achievement and I’m proud to be part of it.”squo;s books of mares and the value of his offspring. But given his imposing brilliance, Japan’s industry players always expected the champion galloper to succeed as a stallion, particularly as he offered a blend of speed to some quality but stout stock.

“We surely believed that Lord Kanaloa would be a success in Japan,” Kaneko says. “There are many middle and long-distance Sunday Silence mares now, so suitable sprinter stallions are desirable.

“Also, the JRA has a lot of two-year-old races under 1600 metres in the summertime and this is very important. That is why we are not surprised by his success and that he is going very well now.”

In those coming-of-age years for Hong Kong’s majors, when the winners also featured the outstanding mares Ouija Board and Alexander Goldrun, the only winning horse to then make a noticeable splash as a stallion was Stay Gold, Japan’s 2001 Hong Kong Vase winner. The son of the breed-shaping Sunday Silence has sired 856 winners in his homeland from 1,256 starters, including the outstanding if mercurial champion Orfevre.

Also among Stay Gold’s 10 individual G1 scorers is Indy Champ, who, like Maurice before him, heads into this year’s LONGINES Hong Kong Mile with wins in Japan’s ‘big two’ mile races, the Yasuda Kinen and the Mile Championship.

Things have changed in the past decade, and the now regular presence of Japan’s stars, male and female, is some evidence that Hong Kong’s standout races do now hold some gravitas in the ‘stallion-making’ stakes. And perhaps the European perception is shifting too.

High prize money is of course key to drawing top-class contenders from out of their home jurisdictions, and the byproduct of that is that over time those quality runners might lift the prestige of a contest to the point where more horses of stallion potential are likely to compete.

In the past, Hong Kong’s year-end majors have perhaps fallen victim of an ‘after the Lord Mayor’s Show’ syndrome. Some European connections might have viewed them as a bit of an afterthought; after all, you wouldn't send a Derby winner to race in Hong Kong.

Well, not until now, anyway. The appearance of Anthony Van Dyck in Sunday’s G1 LONGINES Hong Kong Vase is some evidence that views perhaps are changing. Aidan O’Brien’s charge will become the first ever Epsom Derby winner to line up at the event.

He is by the all-conquering Galileo and, interestingly in a now increasingly cosmopolitan breeding world, from an Australian mare Believe'n'succeed. Just three months after Anthony Van Dyck won the Derby, his half-sister Bounding made her own headlines with her first foal selling for US$4.1 million at Keeneland’s September Yearling Sale.

If Maurice and Lord Kanaloa can build on positive early signs, the notion of Hong Kong’s big races as stallion-makers could become more than an ambition.

“Winning not only in Japan but also in other countries is very valuable. Their wins were not the exception, and they were very strong wins, and that made Lord Kanaloa and Maurice valuable as stallions,” Kaneko says.

And let’s not forget Akeed Mofeed in all of this: the BMW Hong Kong Derby and Hong Kong Cup victor was a rare colt in the Sha Tin stable block.

He now stands at Swettenham Stud in Australia with a 2019 fee of AU$16,500 and this year his fortunes have taken an upturn. He already has his first progeny in training at his old stomping ground, raising the prospect of his offspring perhaps one day striding out at the LONGINES Hong Kong International Races.