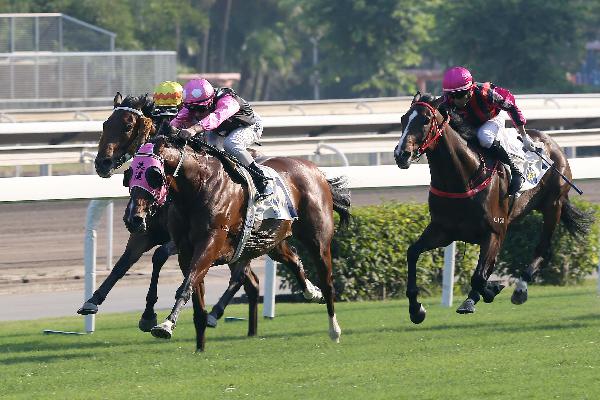 Beauty Generation caned his rivals on his return to action in the G3 Celebration Cup Handicap (1400m) at Sha Tin today, Tuesday, 1 October.

Hong Kong’s star galloper displayed imperious form at his first start of the season. The brilliant bay brushed off the burden of 133lb, as well as large weight concessions to all his rivals, and surged to victory in a track record 1m 20.05s.

“He’s just an amazing horse. To do what he does defies logic to a certain degree,” jockey Zac Purton said. “We only just started to see the best of him at the end of last season so I believe he’s still got plenty ahead of him now.”

“That’s the first part of the mission accomplished!” trainer John Moore said. “With the tail-wind in the straight today I thought he’d have to break a track record to give so much weight away to the others and he did.

“Zac said he felt it in the last 50 metres but that’s to be expected when you're carrying 133 pounds and giving away so much weight.”

Beauty Generation’s victory marked him as the first to complete a hat-trick in the seven-furlong contest. Moore’s plan now is to follow the usual route to what he hopes will be a third win in December’s G1 LONGINES Hong Kong Mile.

“We’re right on target now to go and do what we did last season. Let’s move on to the next one, the Group 2 mile on 20 October, and then the Mile trial (G2 Jockey Club Mile) in November,” Moore said.

Ka Ying Star (113lb) set the pace under Karis Teetan as Purton positioned Beauty Generation second, to the leader’s outside, but when his pink-hooded head poked to the fore at the turn for home, and Purton asked for acceleration, the race was over.

The Road To Rock gelding powered to a length and a quarter score over the brave Ka Ying Star. Waikuku (115lb) ran on for third.

“He’s won out of the box, he’s gone into this the heaviest he’s ever weighed-in in his life, off one soft 1000-metre trial, carrying the grandstand against horses carrying feather weights on their backs,” Purton said, with no shortage of awe.

“That was against him and then, as well as that, he had to run into the headwind down the back straight – it’s really strong and no other horse all day has been able to race on the pace and then been able to compete in the finish.”

There was unfulfilled talk last season of the champ taking his talents overseas. Moore is now keen to take that path before the campaign ends.

“He’s the best in Hong Kong and he’s one of the best in the world,” Moore said. “They’ve got to come to beat him in December and if the owner agrees, we’ll take him to Dubai and prove him on the world stage. That’s definitely in my diary, if everything goes to plan up to then.

“It’s the twilight of my career and I’d love to take him overseas and win a  Group 1, to let the whole world see how good he is. I would regret it 100 percent if we didn't try it, but the owner has talked about travelling so I think if he’s sound and healthy, definitely. He’s done everything else but he hasn't won off-shore and I’m of the opinion he’ll definitely travel. But let’s take them as they come and we can talk about Dubai when that time is approaching.”

In behind Beauty Generation, Teetan was satisfied with the effort Ka Ying Star put in to finish second.

“He ran a very good race,” he said. “He was a little bit green getting to the front and I had to use him a little bit to go around Zac. He saved a lot of ground when he got to the front but he was beaten by a champion.”

“That was a good run,” he said. “It felt like he was still carrying a little bit of condition so he should improve for this run.”

But the champion jockey was out of luck in the last, the Class 2 Beijing Handicap (1200m), aboard the Moore-trained rising star Aethero. The three-year-old over-raced and took a couple of bumps as he ran on well for third behind the admirable Frankie Lor-trained Fat Turtle.

Fat Turtle’s win completed a Moreira four-timer, initiated when he took the day’s other feature, the G3 National Day Cup Handicap (1000m), on the John Size-trained Full Of Beauty (115lb).

The five-year-old Full Of Beauty had raced exclusively at 1200m, clinching five wins last season, but handled the drop in distance with aplomb. The bay scored his biggest success to date by a neck from Jolly Banner (113lb), with Wishful Thinker (126lb) a further short-head third.

Moreira followed up in the next race, the Class 4 Jinan Handicap (1600m), aboard the Manfred Man-trained Smart Patch. That win delivered a brace for Man, the trainer having taken the opener, section two of the Class 4 Chengdu Handicap (1200m), with the Derek Leung-ridden E Star.

Moreira’s third came atop the Tony Millard-trained Super Star in the Class 3 Tianjin Handicap (1400m). That completed a double for the handler, Ezra having earlier landed the Class 4 Nanning Handicap (1400m) under Aldo Domeyer.

Matthew Poon teamed with his boss David Hall to take section one of the Class 4 Chengdu Handicap (1200m) on the 10-race maiden Quadruple Double. The bay returned the 4.5 favourite.

Cruz and Teetan teamed up to take the Class 3 Chongqing Handicap (1800m) with Happy Sebring.