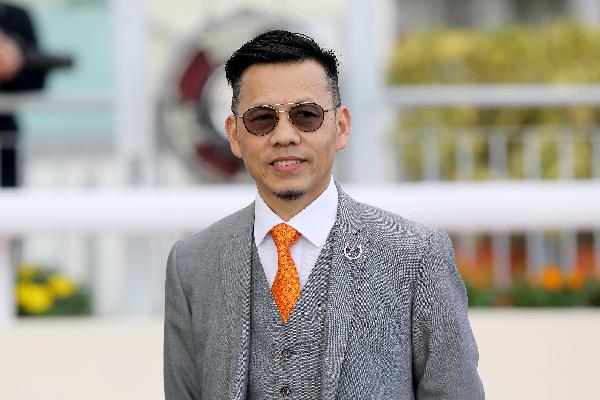 By Declan Schuster
Silvestre de Sousa is looking to hit the ground running when he returns to action at Sha Tin this Sunday (11 September) as he puts an end to a hiatus spanning nearly 1,000 days since he last competed in Hong Kong.

“I hope so (to getting a fast start), I’ll be busy with eight rides on the day and I don’t think they are certainties but they have the chance to finish on the board and with a bit of luck we could win,” De Sousa said.

De Sousa, 41, boasts 91 Hong Kong wins including a 2018 G1 LONGINES Hong Kong Cup (2000m) success aboard Glorious Forever which came only a few days after prevailing in the 2018 LONGINES International Jockeys’ Championship. He ended that fruitful 298-ride stint with 44 wins and HK$70.085 million in stakes through the 2018/19 season.

“I’m excited to be back in Hong Kong, I’m looking forward to it and I hope to have a good future and season ahead. It’s different every year, obviously you have the top boys here and I hope I can challenge them at some point in races. Overall — (I’m) all good, good health, the horses are looking good in the mornings and I just hope they turn up in the afternoon,” De Sousa said.

Gearing up for the season-opening fixture, De Sousa’s eight rides on the 10-race programme include the prized mount on Lucky Sweynesse (115lb) in the Class 1 HKSAR Chief Executive’s Cup Handicap (1200m) following Sky Field’s (135lb) inclusion which spread the allotted weights and ruled out the possibility of Zac Purton being engaged.

“Absolutely, I was lucky to get the ride off Zac (Purton), top weight (Sky Field) came in and he (Lucky Sweynesse) came to be the bottom weight. I think it’s a big plus and a big advantage and when you manage to do the low weight from the bottom to the top (of the handicap) because you have more chances to ride more horses,” De Sousa said.

Lucky Sweynesse was crowned Champion Griffin last season and has built an imposing record for trainer Manfred Man with five wins from seven starts. His current rating is 98 after surging 46 points north of his initial mark (52) following his debut.

“It’s the best race on the card and he’s the talking horse, you know, I’m sure he’ll run well and I don’t know if he is going to win because there are other horses there with a light weight as well coming up in rating, they’ve been improving from last season but I’m looking forward to the ride,” De Sousa said.

Following a recent split with King Power Racing — for whom he won numerous Group 1 races — De Sousa decided the time had come for his return to competition in the Far East and if his recent stints are anything to go by, this one could well be another raging success.

“It’s a place (Hong Kong) that I think everyone believes in luck and I believe in a good horse, so if I manage to get a good horse — I deliver.

“Sometimes we make mistakes but we try to repair the mistakes on the next ride. It’s been pretty amazing, a lot of people leave here with one or two winners but I’ve been pretty lucky, I’ve managed to get more than one, so I’ve been very lucky with the trainers that they put me up and they’ve been very kind, but obviously to get rides you need to deliver first. I hope I can be the man to do deliver for them,” De Sousa said.

Among the Brazilian’s other rides this weekend is Winning Steed in the Class 5 Mount Parker Handicap (1600m) — his first ride back in the Sha Tin opener.

“My goal is just to be safe and injury free, I hope to pick up a nice horse to take me along this season,” De Sousa said.

While De Sousa makes his long-awaited return to the Hong Kong racing cauldron, another rider — Angus Chung — will make a highly anticipated debut after gaining valuable experience in Australia as part of his overseas training before joining Hong Kong’s riding ranks.

“I'm pretty excited for the first meeting and a bit nervous as well. I've ridden in a couple of trials and it's felt a little bit different to Adelaide, so I'm looking forward to Sunday,” Chung said.

A product of the Hong Kong Jockey Club’s Apprentice Jockeys’ School, Chung is indentured to the legendary Tony Cruz as he begins his first campaign in his home city. Chung will claim 10lb as an apprentice.

“He's (Tony Cruz) taught me a lot. He got on the Equicizer (mechanical horse) and taught me how to push the horses and how to jump out of the gates effectively. It's good to be under his guidance.

“Pierre Ng has given me very good support and I hope I can get a winner for him and Chris So and David Hayes have given me good opportunities,” Chung said.

Chung takes a solid book of six rides for his first meeting at Sha Tin, spearheaded by his pairing with the dual Group 2-winning Lucky Patch in the Chief Executive’s Cup.

“It's a very big race for me and I appreciate the opportunity from the owners and the trainer,” Chung said.

Several milestones could also be achieved this weekend as Ricky Yiu sits one away from 900 Hong Kong wins, while Francis Lui (798 wins), Dennis Yip (797), Me Tsui (597) and Derek Leung (399) are also on the cusp of respective feats.

At both Sha Tin’s (Sunday, 11 September) and Happy Valley’s (Wednesday, 14 September) season-opening fixtures there will be Triple Trio and Six Win Bonus’ up for grabs with a colossal HK$88 million spread across the two meetings.