Teetan hopes Duke can lord it over his Challenge Cup rivals 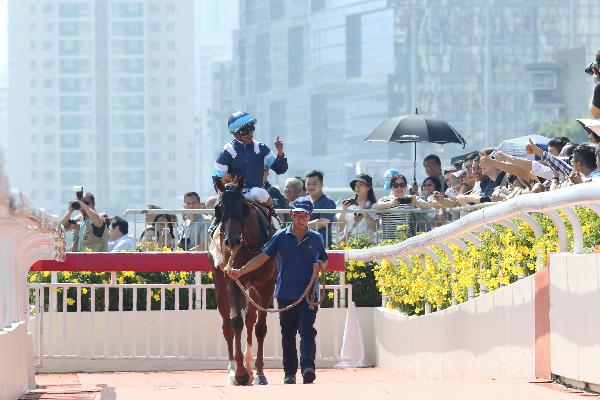 Karis Teetan returns from a two-meeting suspension this Sunday (1 December) and is looking forward to reuniting with Duke Wai (120lb) in the Class 3 Peninsula Golden Jubilee Challenge Cup Handicap (1000m).

The Mauritian combined with the Paul O’Sullivan-trained galloper to score an impressive last-to-first win down the Sha Tin straight earlier this month, overhauling the speedy Lucky More, who has since franked that performance with a comfortable wide margin win.

“The form is standing up pretty good,” Teetan said. “Lucky More was on debut and he burned out with a few horses challenging him but he’s a very good horse and from that form you would have to give my horse a chance again.”

The Per Incanto gelding has won twice from six attempts and Teetan is expecting him to hold his form on Sunday afternoon, even if he is tardy out of the gates.

“He actually didn't miss the start - he was just slow out of the gates and he wouldn’t go with them,” he said of that latest effort.

“I couldn’t chase them the whole way so I had to let him find his momentum and I was impressed - he let down so well with such a big weight - it was an impressive win.”

Duke Wai grabbed third on resumption this season before his eye-catching success last start, which Teetan credits to an added gear change.

“The run before he won went ok, then of course Paul (O’Sullivan) put the blinkers on and it must have done the trick,” the Mauritian said.

Teetan is confident Duke Wai will handle the rise to Class 3 at his first attempt, following a seven-point ratings rise.

“I think there is a lot of improvement still to come, I trialled him last week and he felt very good - he feels like a nice horse underneath you,” the rider said.

Shinn’s back on Stronger

Duke Wai will face 13 opponents in Sunday’s assignment, including Australian import Stronger (133lb) who steps out on debut for John Moore.&nbsp;

Stronger closed out his Australian career with a G3 win at the Gold Coast in the Ken Russell Memorial Classic for two-year-olds, with Blake Shinn in the plate. The rider is booked for the Not A Single Doubt colt’s Hong Kong debut.

“He’s a lovely horse to do anything with, he’s a colt but you wouldn’t know he’s a colt he goes about his business - he just does it very professionally - he’s just a beautiful horse to deal with,” Shinn said.

Prior to his Australian G3 score, the three-year-old finished fourth behind the Godolphin-owned Bivouac in the G3 Kindergarten Stakes.

Bivouac has since ensured that form stands up by winning the G1 Golden Rose at Rosehill, followed by a runner-up effort in the G1 Coolmore Stud Stakes at Flemington, two starts later.

&nbsp;“I think (Stronger) has acclimatised to the Hong Kong environment brilliantly. He’s a consummate professional, his work has been very good, his trial at Happy Valley, I didn’t ride him but it appeared to me that he went well,” Shinn continued.

“From my expectations of him, I think he’s forward enough to run a good race.”

Shinn has ridden three wins at his last three meetings, including a dead-heat shared with Alexis Badel at Happy Valley on 20 November.

The majority of Stronger’s outings in Australia saw him settle worse than midfield but Shinn is hoping he’s able to sit a little handier if possible on Sunday.

“Gate one is probably not the ideal barrier down the straight but the horse has got a little bit of tactical speed, he’s certainly not a leader, he’s more a of a chaser, he needs a target to follow, but I think he shouldn’t be too far away in the run,” he said.

&nbsp;“We’ve got Allied Agility drawn barrier three and we know he’s a horse that’s got plenty of speed so if I can begin positively, and he can jump and follow Allied Agility, hopefully he can take me to a position where I want to be, somewhere closer to the outside and hopefully pounce late.”

Sunday’s 10-race card commences at 12.15pm with the Class 4 Ashley Handicap (1400m) for three-year-olds unraced prior to import.