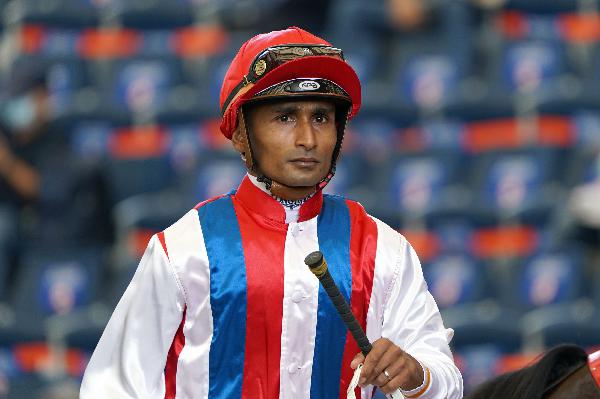 By Declan Schuster
Karis Teetan heads into Wednesday’s (1 June) nine-race card at Happy Valley primed for the mount aboard Escape Route in the second section of the HK$1.57 million Class 3 Caine Handicap (1650m).

Devastating with victory last start at Sha Tin, the penny looks to have finally dropped for the four-year-old’s career in Hong Kong as he chases consecutive wins at his eighth start in town after arriving from Great Britain with one win under his belt.

“Last time he won pretty easy and he went past them like they were standing still, so that’s a good sign already if a horse can make up ground like that so quick.

“I think he is a horse who has a bit of a rating still in hand and I’m looking forward to seeing him run at the Valley,” Teetan said.

Trained by John Size, Escape Route — a son of Dandy Man — failed to place across his first five runs in Hong Kong but prior to export produced two solid efforts at Group 2 level under the care of trainer Richard Fahey at Newmarket and York.

“He appreciated that the track was a little bit wet last time (at Sha Tin) because the time before that he ran a very good race on it. Last time, of course, it worked well for him because we took him back and then to the outside — the whole day horses were coming from the outside.

“I must say, he won a very nice race and I think going forward he is improving,” Teetan said.

The Irish-bred bay has raced four times at Happy Valley without a top-three finish and tomorrow night he’ll step beyond 1400m for the first time — a challenge which has Teetan unconcerned.

“I think it will be ok for him — he’s actually a very quiet horse, he’s very nice and relaxed in the race, so I think at Happy Valley with a bit of speed in the race and if we can get him into a spot where he is comfortable then I think he should finish off his race strongly,” Teetan said.

Fresh following a treble on Sunday (29 May) at Sha Tin, Zac Purton is out to further close the gap on his great championship rival Joao Moreira when he hops aboard a pair of in-form runners for trainer Frankie Lor.

En Pointe makes his Happy Valley debut in the first section of the Class 3 Caine Handicap (1650m) with Purton optimistic that the unforgiving city circuit will assist in his development.

“He has been (very consistent), he continues to turn up and run well. The Valley might suit him with a shorter straight as he tends to accelerate and show a turn of foot and then quickly hits a wall and flattens out.

“It could help him and he doesn’t always change his leg either and Happy Valley is a great track at getting them to do that, they really have to learn how to do all of the little things right to get around there properly, so if anything, he’s going to learn something from the experience,” Purton said.

The Hallowed Crown gelding is a three-time winner this term and steps beyond 1400m for the first time in his Happy Valley debut.

“I can’t see it being a problem (extra distance) — he’s got good speed, he’ll put himself on the pace and then he’s just got to try and kick off the bend and hopefully he can change his leg and give me a strong run to the line,” Purton said.

Purton currently trails Moreira 115-121, edging closer to the Brazilian with a treble on Sunday which included success with Beauty Joy in the HK$3.7 million G3 Lion Rock Trophy Handicap (1600m).

Earlier in the Class 4 Kennedy Handicap (1000m) at Happy Valley, Purton is out to steer Gorgeous Vitality to consecutive wins after the son of Deep Field demolished rivals by close to four lengths last start.

“He showed a little bit early in his career and then he got it wrong the start before but he did everything right last time and he won well.

“I think he’s adaptable and he can also perform on the dry track which is what we’re going to get but if he can get the start right again and get himself into a nice spot, hopefully he can get the job done,” Purton said.

Wednesday’s (1 June) nine-race fixture at Happy Valley kicks off at 6.45pm with the second section of the Class 4 Robinson Handicap (1650m).